In general, group size tends to increase with water depth and openness of habitat. This may correlate with foraging strategies and protection. 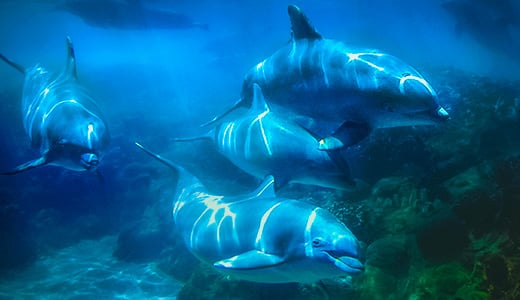 In the wild, group composition and structure are based largely on age, sex, reproductive condition, family relationships, and association histories. 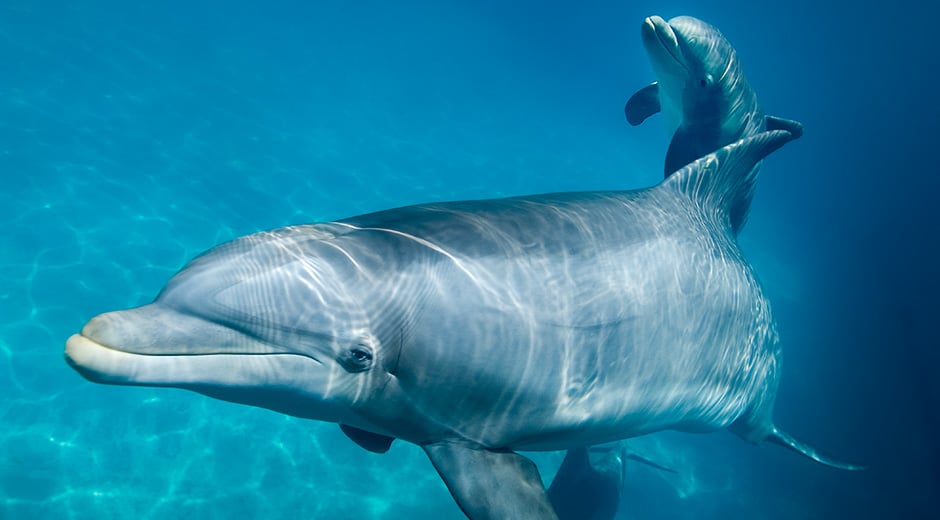 Inter-sexual competition and conflict are common causes of aggressive behaviors between group members. 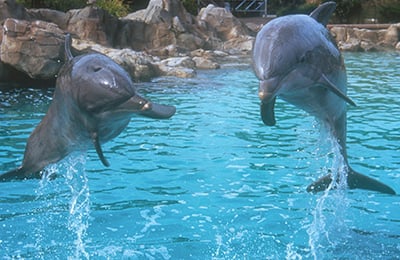 Bottlenose dolphins are active to some degree both day and night.

Observations indicate that dolphins undergo daily cycles of activity, which include feeding, socializing, traveling, and resting.

Feeding usually peaks in the early morning and late afternoon.

Daily activity cycles are influenced by both environmental factors (habitat, time of year, time of day) and physiological factors.

Dolphins frequently ride on the bow waves or the stern wakes of boats. This activity is probably adapted from the natural behavior of riding ocean swells, the wakes of large whales, or a mother dolphin's slip stream (hydrodynamic wake).

Dolphins have been seen jumping as high as 4.9 m (16 ft) from the surface of the water and landing on their backs, bellies, or sides in a behavior called a breach.

Both young and old dolphins chase one another, carry objects around, toss seaweed to each other, and use objects to solicit interaction. Such activity may be practice for catching food.

At SeaWorld, dolphins have been observed using objects like fish in seemingly playful ways. They even use air forced out of their blowholes as a form of play.  A young bottlenose dolphin at Dolphin Cove has learned how to create and control bubble rings of air to play with.

Large adult males often roam the periphery of a group, and may afford some protection against predators.

Researchers have observed scouting behavior in bottlenose dolphins. An individual may investigate novel objects or unfamiliar territories and "report" back to the group.

Bottlenose dolphins may aid ill or injured dolphins. They may stand by and vocalize, or they may physically support the animal at the surface so it can breathe.

Bottlenose dolphins have been seen with groups of toothed whales such as pilot whales (Globicephala macrorhynchus), Risso's dolphins (Grampus griseus), spotted dolphins (Stenella attenuata), and rough-toothed dolphins (Stenella bradanensis). Increased protection from predators and more efficient hunting of fish are two of the likely benefits that both species gain by forming these unusual partnerships.

Researchers have observed bottlenose dolphins chasing and displacing other species of dolphins from prime bow-riding spots in waves.

Some dolphins may approach divers, swimmers, or boaters. 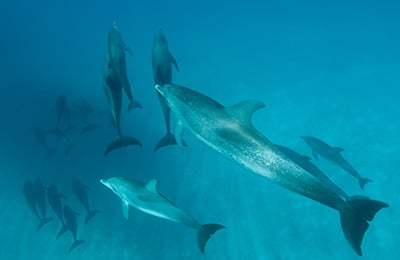 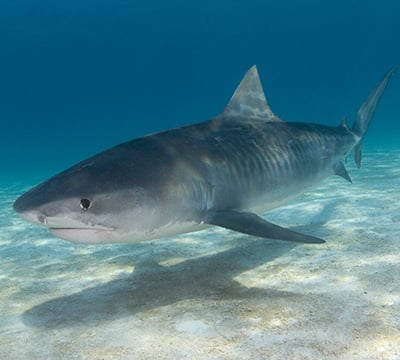