Why Sound in the Sea is Important

A human vocalizes (makes sound) by exhaling — our lungs force air through our larynx. Vocal cords in the larynx vibrate as air flows across them, producing sounds. Our throat, tongue, mouth, and lips shape these sounds into speech. 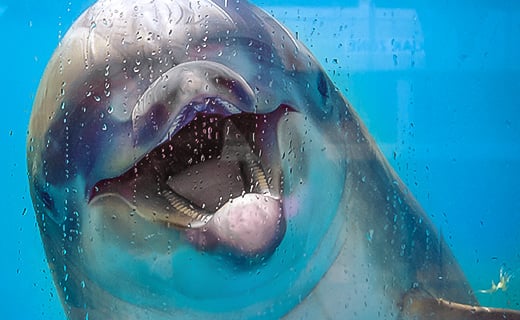 A dolphin does not have vocal cords in its larynx. Sounds are probably produced by air movements in the nasal passage.

During some vocalizations, bottlenose dolphins actually release air from the blowhole, but scientists believe that these bubble trails and clouds are a visual display and not necessary for producing sound.

Bottlenose dolphins produce whistles and sounds that resemble moans, trills, grunts, squeaks, and creaking doors. They make these sounds at any time and at considerable depths. Sounds vary in volume, wavelength, frequency, and pattern.

The frequency of the sounds produced by a bottlenose dolphin ranges from 0.2 to 150 kHz. The lower frequency vocalizations (about 0.2 to 50 kHz) are likely used in social communication. Social signals have their most energy at frequencies less than 40 kHz. Higher frequency clicks (40 to 150 kHz) are primarily used for echolocation.

Signature whistle frequencies typically range from 7 to 15 kHz and last less than one second. 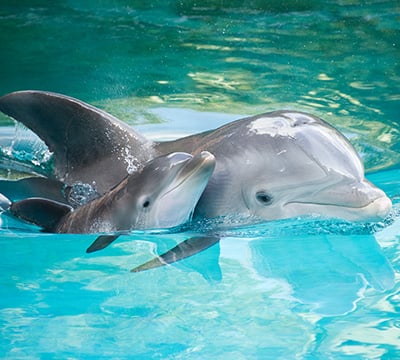 A mother dolphin may whistle to her calf almost continuously for several days after giving birth. This acoustic imprinting helps the calf learn to identify its mother.

A dolphin develops its signature whistle as young as one month old.

Dolphins may mimic each other's signature whistles and scientists have hypothesized that dolphins use the whistles for social interaction.

Scientists have found no evidence of a dolphin language.

The term echolocation refers to an ability that odontocetes (and some other marine mammals and most bats) possess that enables them to locate and discriminate objects by projecting high-frequency sound waves and listening for echoes as the sound waves reflect off objects. Odontocetes echolocate by producing clicking sounds and then receiving and interpreting the resulting echo.

By this complex system of echolocation, dolphins can determine size, shape, speed, distance, direction, and even some of the internal structure of objects in the water.

Despite the effectiveness of echolocation, studies show that a visually-deprived dolphin takes more time to echolocate on an object than a dolphin using vision in tandem with echolocation.

Loud impulse sounds recorded from bottlenose dolphins may serve to stun prey or confuse predators; however this suggestion has not yet been confirmed.