A cheetah is constructed for high speed sprints of up to 70 miles per hour and is capable of accelerating from 0 to 50 miles per hour after just three strides. To do this, the cheetah has a different body design from other cats.

Adaptations needed for rapid acceleration include a small, aerodynamic body frame, lightweight skeleton, and long leg and foot bones. The spine is highly flexible — another adaptation for an animal that makes sudden, long, and rapid strides.

In a tradeoff for having various adaptations needed for rapid acceleration to pursue prey, such as a reduced muzzle and smaller skull size, cheetahs have weak jaws and smaller canine teeth compared to other large cats 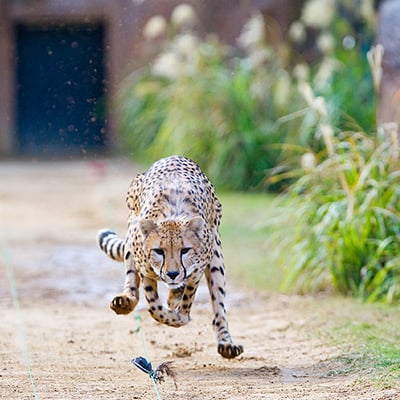 A cheetah's legs are longer and leaner than those of other cats. The legs also contain spring-like ligaments to aid endurance.

Like a horse, the cheetah can lift all four feet off the ground and cross them underneath the body while bounding along. A single stride may cover 23 feet — the same distance as a much larger race horse in full stride.

Rapid acceleration requires a cheetah to have high oxygen intake adaptations including enlarged nostrils and extensive, air-filled sinuses. While running, a cheetah's specially adapted respiratory system allows it to go from a normal rate of 60 breaths per minute to 150 breaths per minute. 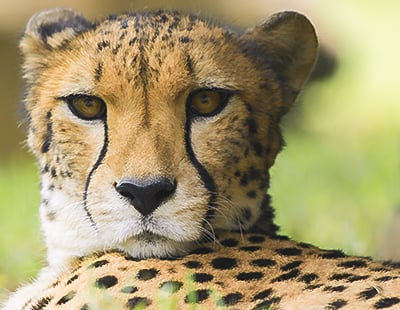 Cheetahs have a small, thin-boned skull with a relatively flat face and reduced muzzle size — these adaptations allow their large eyes to be positioned for maximum binocular vision.

Cheetahs have paws that are narrower than other large felids, resembling the paws of dogs rather than cats. During fast sprints, a cheetah's paws have minimal contact with the ground.

Cheetahs have claws that are blunt, slightly curved, and only semi-retractable. Cheetah claws are like running spikes, used to increase traction while pursuing prey. Ridges running along the footpads act like tire treads for additional traction.

Cheetahs have a curved dewclaw on their forelegs. While in pursuit, as a cheetah nears its target, it will swat and trip the prey animal with its dewclaw.

A cheetah's tail stretches out and acts as a counterbalance for sharp turns. The flattened tip of the tail acts like a rudder to guide direction during high speed chases.