The oldest and strongest adult male silverback is usually dominant in the troop and has exclusive breeding rights to the females.

Adolescent females transfer to another troop before reproducing at around 8 years of age. Generally the first troop a female reproduces in will become her permanent family. A female's status or rank in the family is generally determined by the order in which she was recruited into the troop. Late arrivals do not receive the benefits of high ranking females such as having their offspring remain close to the dominant silverback for protection. It is for this reason that females most often join a lone silverback or a newly formed troop rather than a long-established one.

An adolescent male most often splits from his parent group due to lack of breeding opportunity. Usually the adolescent male will remain solitary until he forms his own troop. This process takes several years and begins by the juvenile male separating himself just outside from the troop. As time progresses, his distances increase from the parental group.

Troop populations usually range in size from 2 to 12 individuals with 9 being the average. They are highly synchronized in their activity patterns. If a troop consists of multiple silverbacks they are usually the sons of the dominant adult male silverback. One of the largest gorilla troops identified had 4 silverbacks, 5 blackbacks, 12 adult females, and 16 young.

Silverbacks are typically more aggressive than other group members since the troop's safety is their responsibility. The silverback makes all group decisions, is responsible for most of the calls, receives the dominant portion of food (even when resources are limited) and can terminate troublesome behavior with just a look. A male must have an established home range and great strength to confront any rival before acquiring his own troop. Therefore most silverbacks are usually solitary for about 4 years and turn 15 before acquiring a troop of their own.

Adult females are not bonded to one another and usually compete to groom and stay close to the silverback. Mothers are closely bonded to their offspring for the first three years of life.

Competition for adult females is high and will often result in aggressive interactions between a dominant and rival silverback who is looking to either start or expand a troop. These confrontations may intermittently last for days and involve all the troop members.

Gorillas will give each other nose-to-nose greetings and gestures of reassurance such as embracing or touching. 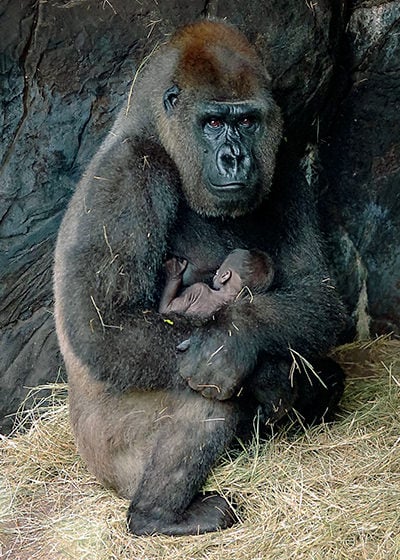 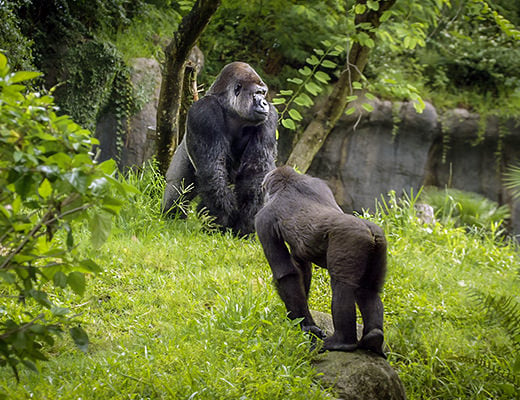 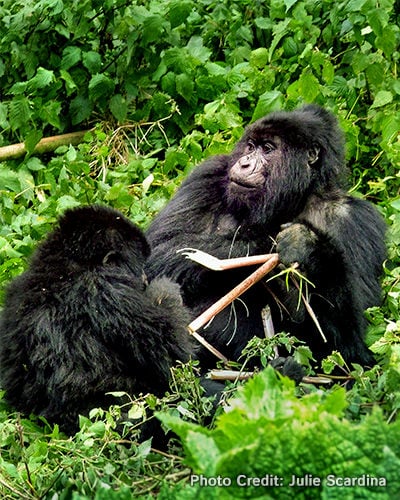 Gorillas spend about 14 hours feeding and foraging and about 10 hours resting every day.

Gorillas construct "beds" to sleep in at the end of the day. They gather vegetation around them in trees or on the ground. Gorillas construct a new nest each night because they travel to different locations during the day foraging. The daily construction of new nests also helps avoid parasites that may nest in the bedding.

Gorillas build nests to sleep in and the presence of sufficient nesting material determines the location in which they bed. Nest construction varies, but usually consists of bent/broken vines and branches formed around and underneath each individual. Infants sleep in their mother's nest until they are about 3 years of age. However, some offspring as young as 8 months practice nest building. Nests function to keep the gorillas off the cold ground, prevent them slipping down a slope, or support them in a tree during the night. Researchers can identify the size, age, activity and make-up of a gorilla troop based on their nests.

Gorillas most often walk quadrupedally (four-footed) with limited bipedal (two-footed) movements. Gorillas and chimpanzees have a distinctive walk called knuckle-walking. The walk derived its name because they walk on their knuckles, not on their palms.

Gorillas usually travel only about 0.5 to 1 km (0.3 to 0.6 mi.) per day when there is ample food supply, since they have a slow pace and relatively large body size which makes it difficult to travel extensively.

It is extremely rare that gorillas would compete for or share food. 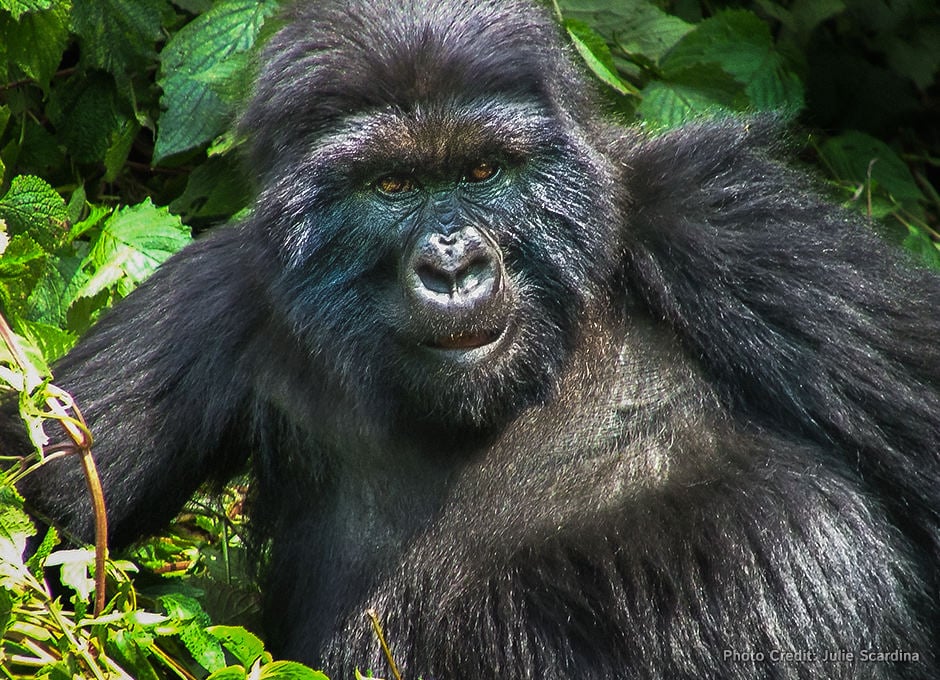 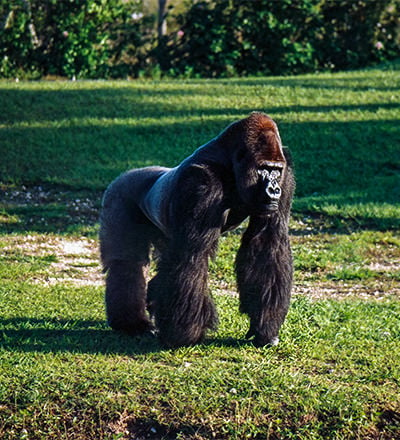 The dominant silverback is responsible for the protection and safety of the troop. When in a threatening situation, the silverback will ferociously beat its chest, produce loud scowling vocalizations and a pungent odor (which humans can detect from over 25 yards away), throw vegetation and charge at its opponent or intruder. Researchers have discovered that 99% of their charges are bluffs; providing the rest of the troop time for retreating to a safe distance. However if pressed, the silverback will follow through with his threat.

Gorillas are tolerant and unaffected by chimpanzees leisurely wandering through their tight cohesive troops.