Sharks have only an inner ear, which consists of three chambers and an ear stone called an otolith. A shark's inner ear detects sound, acceleration, and gravity.

Sharks use sound to locate food.

The lateral line system is a series of fluid-filled canals just below the skin of the head and along the sides of the body. The canal is open to the surrounding water through tiny pores.

The lateral line canals contain a number of sensory cells called neuromasts. Tiny hair-like structures on the neuromasts project out into the canal. Water movement created by turbulence, currents, or vibrations displaces these hair-like projections and stimulates the neuromasts. This stimulation triggers a nerve impulse to the brain. 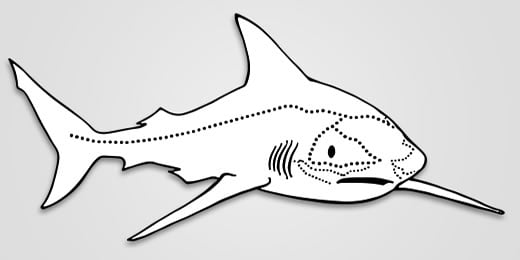 The lateral line system is a series of fluid-filled canals just below the skin of the head and along the sides of the body.

Sharks have a basic vertebrate eye, but it is laterally compressed. The lens is large and spherical.

Although the threshold of a shark's visual acuity has not been demonstrated, it is apparent that they are well-suited for seeing in dim light. Their eyes are particularly sensitive to moving objects.

Unlike those of other fishes, a shark's pupil can dilate and contract.

Cone cells are present, indicating that sharks may have some sort of color vision.

Some sharks are extremely sensitive to direct sunlight. Puffadder shysharks (Haploblepharus edwardsii) curl their tails back to cover their eyes if they are pulled out of the water. 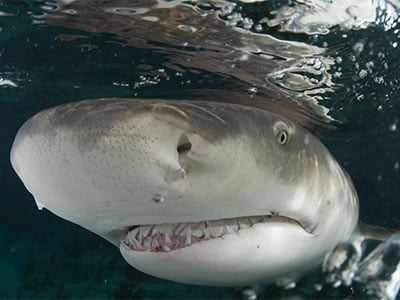 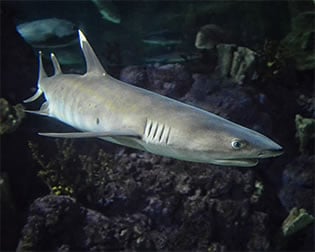 Sharks and batoids have taste buds inside their mouths. These taste buds have not been studied extensively. Taste may be responsible for a shark's final acceptance or rejection of prey items. Some sharks seem to prefer certain foods over others and have been known to spit out things that may have had an unpleasant taste.

Paired external nostrils with an incurrent and an excurrent opening lead to ventral olfactory organs (organs which function in smelling). Olfactory organs are blind sacs which are not connected with the mouth.

Sharks have an acute sense of smell. They are well-known for their ability to detect minute quantities of substances such as blood in the water. Sharks can detect a concentration as low as one part per billion of some chemicals, such as certain amino acids. A shark's sense of smell functions up to hundreds of meters away from a source.

Some sharks have "whiskers" or barbels near the nostril area. The mandarin dogfish (Cirrhigaleus barbifer) trails its long barbels on the ocean floor. Presumably the barbels enhance tactile or chemoreceptors. This feature can be found on other species such as sawsharks (family Pristiophoridae) and nurse sharks (family Ginglymostomatidae). 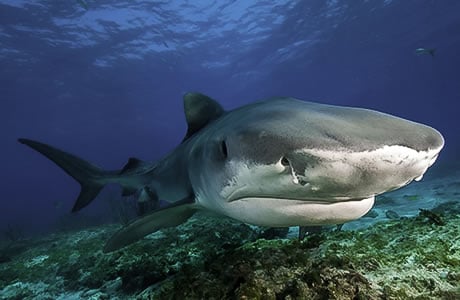 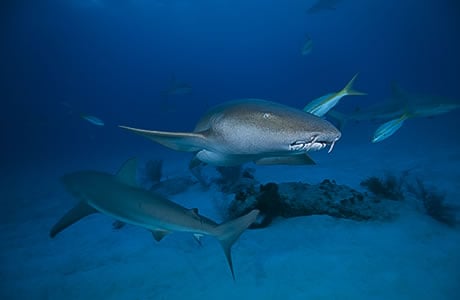 The ampullae of Lorenzini form a complex and extensive sensory system around a shark's head.

External pores cover the surface of a shark's head. Each pore leads to a jelly-filled canal that leads to a membranous sac called an ampulla. In the wall of the ampulla are sensory cells innervated by several nerve fibers.

Ampullae of Lorenzini are effective only within inches, as they sense bioelectric fields in the final stages of prey capture.

Mainly considered electroreceptors, it is possible that the ampullae of Lorenzini may also detect temperature, salinity, changes in water pressure, mechanical stimuli, and magnetic fields. 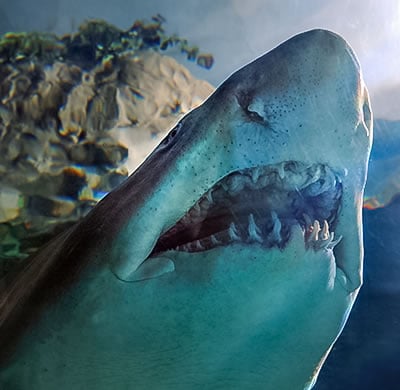 A sensory pit is formed by the overlapping of two enlarged placoid scales guarding a slight depression in the skin. At the bottom of the pit is a sensory papilla: a small cluster of sensory cells that resemble a taste bud.

Sensory pits are distributed in large numbers on the back, flank, and lower jaw.