Calves are born March through September, depending on the region. Most are born May through July.

A female may give birth to a single calf every two to three years. Twins are rare.

Deliveries can either be tail first or head first.

The umbilical cord snaps during or soon after delivery.

At birth beluga calves are generally dark gray to bluish or brownish gray, becoming darker at about one month. 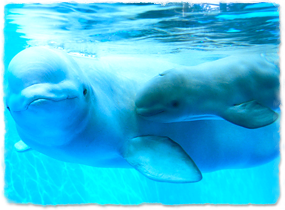 At birth, calves are noticeably darker in color than their mothers.

Young belugas learn survival behaviors by observing and mimicking adults in their pod.

Like other mammals, a mother beluga whale nurses her calf. A calf suckles below the water from nipples concealed in abdominal mammary slits.

The calf may begin nursing several hours after birth and then nurses at hourly intervals thereafter.

According to research in zoological parks, the composition of beluga milk varies widely among individuals and fluctuates throughout the nursing period. Beluga milk may average 28% milkfat, 11% protein, and 60.25% water. The milk yields approximately 92 calories per ounce.

Beluga calves are dependent upon nursing for the first year, until their teeth emerge. They then supplement their diets with shrimps and small fishes. Most calves nurse for 20 to 24 months. 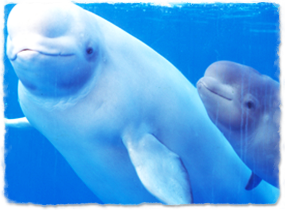 Several mothers with their calves will often form pods separate from males.

While most maternal behavior is probably instinctive, first-time mothers are inexperienced at nursing their calves. At SeaWorld, the experience level of some first-time mothers increased through training procedures that teach them to respond to nursing behavior prior to giving birth.