A beluga whale's body is fusiform, but robust and stocky. It may have thick folds of blubber, especially along its ventral surface. 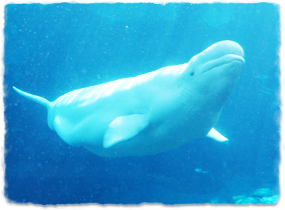 Beluga whales are robust and stocky with thick folds of blubber.

The pectoral flippers are small in proportion to the body. They're rounded, paddle-like, and slightly upcurled at the tips.

Beluga whales use their pectoral flippers mainly to steer and, with the help of the flukes, to stop.

Each lobe of the tail is called a fluke. A deep median notch separates the two flukes.

The flukes of beluga whales are distinctly curved along the trailing edges.

Longitudinal muscles of the back (both above and below the spine) and caudal peduncle move the flukes up and down.

All traces of hind limbs have disappeared except for two reduced, rod-shaped pelvic bones, which are buried deep in body muscle.

These reduced hind limbs are not connected to the vertebral column.

Beluga whales lack a dorsal fin. Without a dorsal fin, they have less surface area for heat loss, and can more easily swim just below ice sheets to locate breathing holes.

The beluga has a dorsal ridge that runs from just behind the midpoint of the back to the tail flukes. The dorsal ridge may be notched, forming a series of small bumps, and may be dark gray. 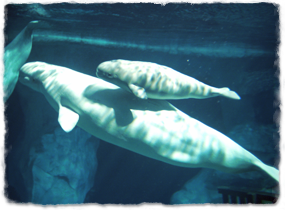 Belugas have a dorsal ridge rather than a dorsal fin.

The seven neck vertebrae of a beluga whale are not fused, as they are in most cetaceans. As a result, a beluga has greater mobility and flexibility in its neck. 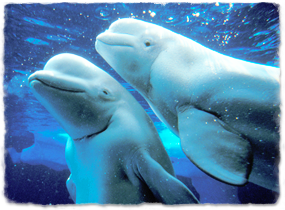 The seven vertebrae in the beluga's neck are not fused, giving the species greater mobility and flexibility in its neck.

Belugas have eight to ten peg-shaped teeth on each side of both upper and lower jaws. Belugas have an average of 34 teeth.

Teeth are adapted for grasping and tearing rather than chewing.

The melon is a rounded structure on the dorsal surface of a whale's head, just in front of the blowhole. On beluga whales it is prominent and overhangs the rostrum. The melon is composed of lipids (fats).

A beluga's melon is generally more flexible compared to other whale species.

The melon probably facilitates sound production. It changes shape when the whale is producing sounds. 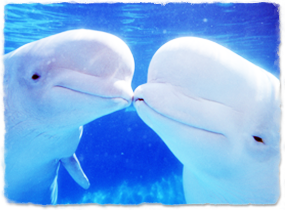 The rounded, flexible melon on the forehead of belugas probably facilitates sound production.

A beluga whale's small, dark eyes are located behind the corners of the mouth.

Ears, located just behind the eyes, are inconspicuous openings with no external pinnae (flaps).

A single blowhole, located on the dorsal surface of the head, is covered by a muscular flap. The flap provides a water-tight seal.

A beluga whale breathes through its blowhole.

The blowhole is relaxed in a closed position. To open the blowhole, a beluga contracts the muscular flap.

Like most other cetaceans, beluga whales lack hair as adults.

Unlike other cetaceans, which tend to generate and shed skin continuously, beluga whales appear to undergo a seasonal molt of the outer layer of skin. During the winter, the top layer of a beluga's skin may turn yellow, especially on its back and flippers. Rubbing on gravel river bottoms helps a beluga to shed this layer of skin.