Odontoceti is a scientific suborder of whales that have teeth. The word "odontocete" comes from the Greek word for tooth, odontos.

The only other member of this whale family is the narwhal, another arctic species. 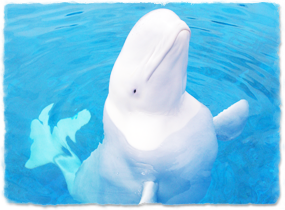 The scientific name for the beluga literally means "white dolphin without a fin."

Other common names for the beluga include "white whale" and "belukha." They are also nicknamed "sea canaries" because of their vocalizations.

Scientists believe that early whales arose 55 to 60 million years ago from (now extinct) ancient land mammals that ventured back into the sea.

Representatives from the modern family Monodontidae first appear in the fossil record 9 to 10 million years ago in the eastern north Pacific.