Beluga whales are entirely arctic and subarctic. They inhabit the Arctic Ocean and its adjoining seas, including the Sea of Okhotsk, the Bering Sea, the Gulf of Alaska, the Beaufort Sea, Baffin Bay, Hudson Bay, and the Gulf of St. Lawrence. 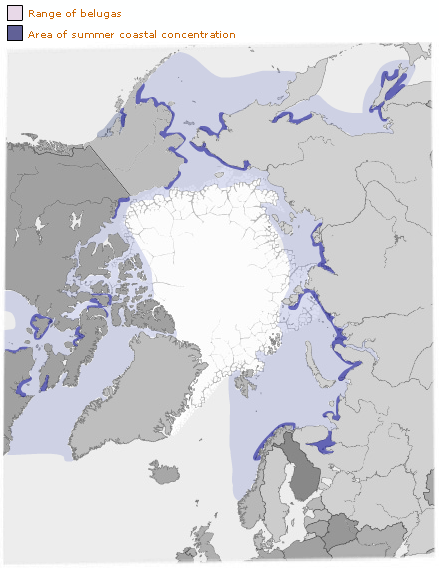 Beluga whales inhabit the Arctic Ocean and its adjoining seas. During certain times of the year they are also found in large rivers.

During certain times of the year belugas can be found in large rivers such as the Amur River of Russia, and the Yukon and St. Lawrence rivers of Canada. Belugas have been found 1,995 km (1,240 mi.) up the Amur River, and 965 km (600 mi.) up the Yukon.

Belugas swim among icebergs and ice floes in the icy waters of the arctic and subarctic, where water temperatures may be as low as 0°C (32°F).

In the summer many populations are found in warm-water estuaries and river basins.

Belugas seem to be well adapted to both a cold ocean habitat and a warmer freshwater habitat.

Some beluga populations make seasonal migrations while others remain in a relatively small area year-round.

Most beluga whales migrate south as the ice pack advances in the autumn. One population summers in the Mackenzie River estuary of Northwest Territories, Canada, and migrates 5,000 km (3,105 mi.) southwest to coastal areas of the Bering Sea in the winter.

Belugas may migrate to either shallower or deeper waters.