Beluga whales have a well-developed, acute sense of hearing. The auditory cortex of the brain is highly developed.

A beluga whale can hear sounds in the range of 1.2 to 120 kHz, with a peak sensitivity of about 10 to 75 kHz. In comparison, the average hearing range for humans is about 0.02 to 20 kHz. In a study using two trained beluga whales in an open-ocean environment, scientists found that the sensitivity of a beluga's hearing does not change with depth. 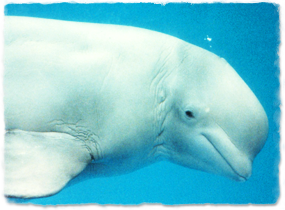 Belugas have a tiny external ear opening a few inches behind each eye.

Beluga whales have acute vision both in and out of the water.

A beluga's eye is particularly adapted for seeing in water. In air, certain features of the lens and cornea correct for the nearsightedness that results from the refraction (bending) of light rays as they go from water to air.

A beluga's retinas contain both rod and cone cells, indicating that they may have the ability to see in both dim and bright light. (Rod cells respond to lower light levels than cone cells do.) As with other whales, belugas lack short wave-length sensitive visual pigments in their cone cells indicating a more limited capacity for color vision than most land mammals.

Glands at the inner corners of the eye sockets secrete an oily, jelly-like mucus that lubricates the eyes and washes away debris. This tear-like film may also protect the eyes from infectious organisms. 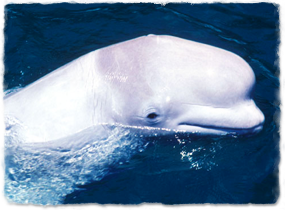 Belugas have excellent eyesight in and out of the water.

Studies on belugas in zoological environments indicate that they seek out physical contact with other belugas.

Biologists have noted sensory areas in beluga whale mouths that may function in taste.

Olfactory lobes of the brain are absent in all toothed whales, suggesting that they have no sense of smell.