Swimming speed and duration are closely tied: high-speed swimming probably lasts only seconds, while low-speed swimming may last for long periods of time.

Dolphins are among the world's most efficient swimmers.

Bottlenose dolphins sometimes "porpoise" at the surface; they swim fast enough to break free of the water, flying up and out and then back under in one continuous movement, which they generally repeat. Porpoising uses less energy than swimming fast at the surface.

Certain toothed whales, such as bottlenose dolphins, sometimes ride ocean swells or a boat's bow or stern wake. Riding a wave or a wake, a dolphin can go almost twice as fast using the same energy cost. 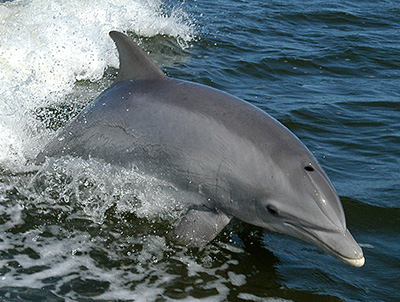 A dolphin breathes through a single blowhole on the top surface of its head. The blowhole is covered by a muscular flap, which provides a watertight seal.

During each respiration a dolphin exchanges 80% or more of its lung air. This is much more efficient than humans, who exchange only about 17% of their lung air with each breath.

Exhaling and inhaling takes about 0.3 seconds. A bottlenose dolphin's respiratory rate is about 1.5 to 4 respirations per minute.

The visible spout of water that often rises from a dolphin's blowhole is not coming from the lungs, which (like ours) do not tolerate water. 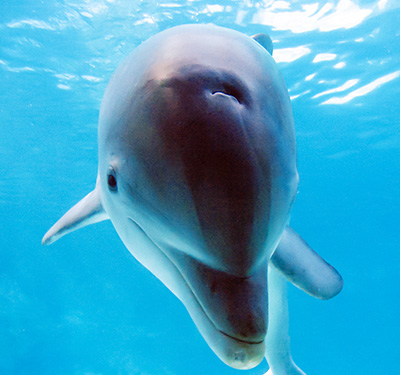 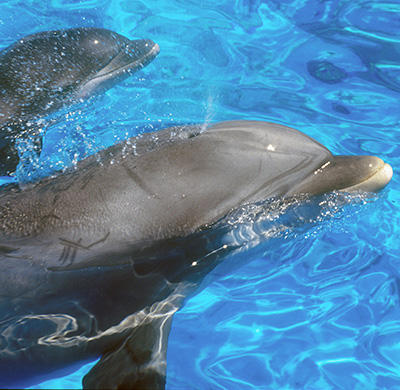 Bottlenose dolphins generally do not need to dive very deep to catch food.

On average a dive may last up to 10 minutes. A bottlenose dolphin's maximum breath-holding capability is about 12 minutes.

All marine mammals have special physiological adaptations for diving. These adaptations enable a dolphin to conserve oxygen.

Both humans and cetaceans can experience negative physiological impacts from diving.

Like other mammals, dolphins maintain a constant body temperature. A dolphin's core body temperature is about 36° to 37°C (96.8° to 98.6°F), about the same as that of a human.

Dolphins have several thermoregulatory strategies to retain or release heat.

In general, bottlenose dolphins have a higher metabolic rate than land mammals of similar size. This increased metabolism generates a great deal of body heat.

Mammals lose body heat when they exhale. But dolphins conserve a considerable amount of heat because they breathe less frequently than land mammals.

When studying sleep in bottlenose dolphins, researchers found that dolphins spent about 33% of each day sleeping.

Researchers have shown, through both observations and electro-physiological studies that deep sleep in bottlenose dolphins and other whales may occur in only one brain hemisphere at a time.