Comparisons of mammal brains are described as the ratio of brain size relative to body size. Bottlenose dolphin brains are larger than many other mammals of the same body size. Scientists are still determining what aquatic adaptations require the large brain size. One likely theory is that a larger brain size in dolphins may be at least partially due to an increased size of the auditory region to facilitate sound processing.

Hypotheses that large brain size in dolphins indicates high intelligence are untested and disputed. The ability of an animal to process information is based upon its brain anatomy as well as the specific experiences the animal has. Rating the intelligence of different animals is misleading and extremely subjective. In fact, a reliable and consistent intelligence test for humans has yet to be developed. It would be improper to attempt to quantify or qualify the intelligence of animals using only human guidelines. 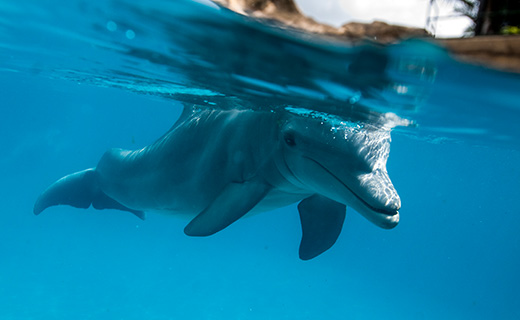 Dolphins have a well-developed, acute sense of hearing. 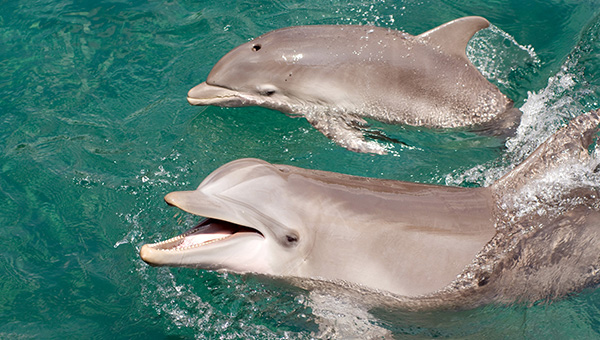 Ears, located just behind the eyes, are small inconspicuous openings, with no external pinnae (flaps).

Dolphins have acute vision both in and out of the water. A dolphin's eye is particularly adapted for seeing under water.

A dolphin's retinas contain both rod cells and cone cells, indicating that they may have the ability to see in both dim and bright light. (Rod cells respond to lower light levels than cone cells.) Researchers theorize that all modern cetaceans, including all toothed whales, lack S-cone cells and therefore aren't able to discriminate color in the blue wavelengths.

Behavioral studies have suggested they might have some color vision. However, behavioral color vision studies are difficult due to the inability to accurately determine whether the animal is responding to color versus brightness.

Dolphins' eyes have a well-developed tapetum lucidum, a light-reflecting layer that reflects light through the retina a second time, adapting their vision to low-light levels.

Dolphins are primarily monocular (using one eye to process visual stimuli), but also possess the capability for binocular vision (when both eyes are coordinated for vision).

Evidence suggest that bottlenose dolphins use their right eye predominantly for approaching and investigation when processing visual information. 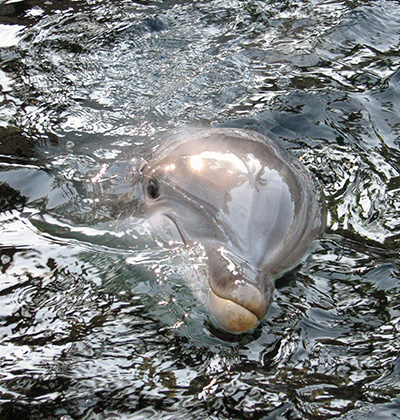 The skin of bottlenose dolphins is sensitive to vibrations. Nerve endings are particularly concentrated around the dolphin’s eyes, blowhole, genital area, and rostrum, suggesting that these areas are more sensitive than the rest of the body.

Little is known about a toothed whale's sense of taste. They do have taste buds at the base of the tongue, although they haven't been well studied.

Behavioral evidence suggests that bottlenose dolphins can detect 3 or 4 primary tastes (sweet, bitter, sour, salty), but the way they use their ability to “taste” is still unclear. 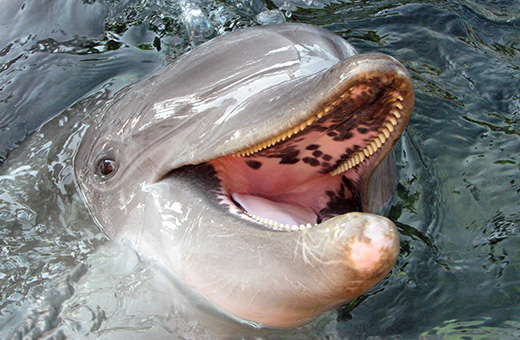 Olfactory lobes of the brain and olfactory nerves are absent in all toothed whales, indicating that they may not have a sense of smell.