Cheetahs have an upper coat of fur that is tawny, pale buff or grayish white, with underparts that are paler and whiter. Black spots are set close together on the pelage with a series of black rings around the last one-third of the tail. 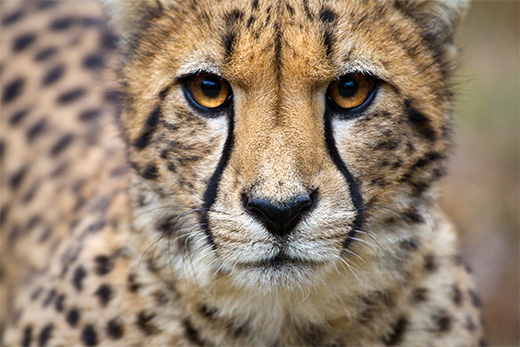 Based on an usual color variation, an additional cheetah species was described in 1927 — A. rex, or the king cheetah. The species was based upon cheetahs that were found to have longer, softer hair and replacement of some spotted patterns with dark bars. However, it is now generally accepted that this was simply a very rare color variation of A. jubatus. 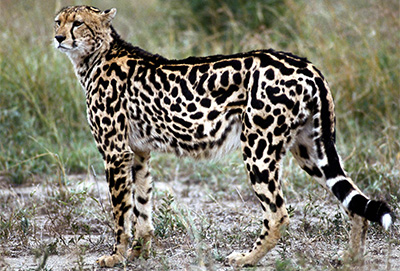 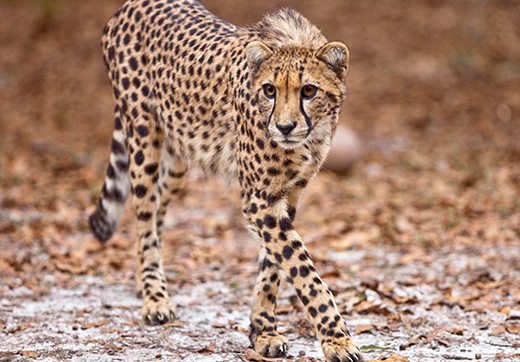 Cheetah kittens have fur colored in a way that is opposite normal countershading, in theory to mimic the coloration of a honey badger.

A vast majority of mammals are countershaded — the top area of its body is darker than the underneath surface. Countershading helps an animal to blend in with its environment and appear inconspicuous.

Honey badgers (Mellivora capensis), known in part for their highly aggressive nature, are more visible with their opposing countershaded coloration (light on top while darker on their undersides). This likely serves as a visual warning so they can be more easily seen by larger predators and avoided.

Cheetah kittens are highly susceptible to predators like lions that rely heavily on eyesight to target prey. With coloration similar to honey badgers, in theory predators may spot them from a distance and may avoid them if mistaken for a honey badger. 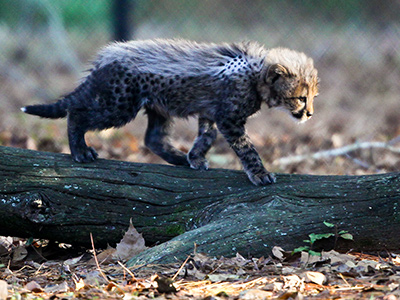 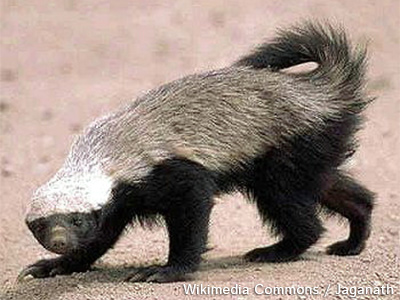 Cheetahs have relatively small heads, small ears, and high set eyes. Rapid acceleration requires a cheetah to have high oxygen intake adaptations including enlarged nostrils and extensive, air-filled sinuses. While running, a cheetah's specially adapted repertory system allows it to go from a normal rate of 60 breaths per minute to 150 breaths per minute. 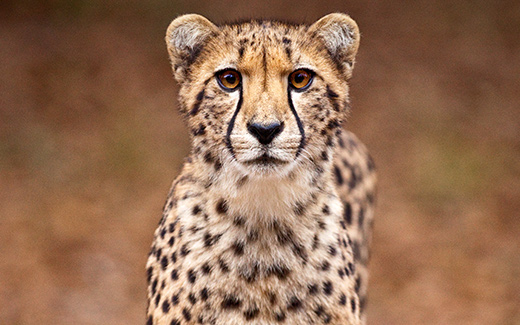 Cheetahs have a small, thin-boned skull with a relatively flat face and reduced muzzle size — these adaptations allow their large eyes to be positioned for maximum binocular vision. There is a high concentration of nerve cells leading to the optic nerve, which allows cheetahs to detect prey in open habitats that move against the horizon. A nictitating membrane further shields and protects the eyes during fast sprints.

The tail of a cheetah can measure 66 to 84 cm (26-33 in.), which is about two-thirds of its body length. During fast sprints, a cheetah's paws have minimal contact with the ground. At such times, a cheetah's tail stretches out and acts as a counterbalance during sharp turns. The flattened tip of the tail also acts like a rudder to guide direction. 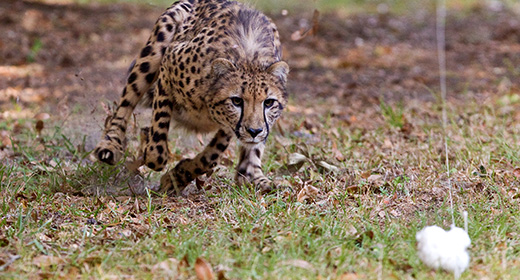 Cheetahs have paws that are narrower than other large felids, resembling the paws of dogs rather than cats. Cheetahs have claws that are blunt, slightly curved and only semi-retractable. Cheetah claws are like running spikes, used to increase traction while pursuing prey. Ridges running along the footpads act like car tire treads for additional traction.

In a tradeoff for having various adaptations needed for rapid acceleration to pursue prey, such as a reduced muzzle and smaller skull size, cheetahs have weak jaws and smaller canine teeth compared to other large cats. This leaves cheetahs vulnerable when it comes to defending captured prey from other larger predators.