The Felidae family consists of 2 subfamilies (Pantherniae and Felinae) and 4 extant genera (Felis, Neofelis, Panthera, and Acinonyx) and 38 species.

Cats in this grouping have the ability to "roar" but not "purr". (See "Purring" vs. "Roaring" Cats section in Communication.)

Roaring occurs due to "ossified hyoid and both divided and undivided vocal folds". This statement refers to the twiglike hyoid bones in the neck that help to anchor the tongue in place. These larger-sized cats have tongues further secured in place with a longer length of tough cartilage that begins at the hyoid bones and ends in the skull. This prevents a member of Panthera from purring but is flexible enough to allow their larynx the ability to roar.

Most in this family prefer to make other sounds (snarling, hissing, grunting, yowling, coughing) — the lion is the only Panthera member that roars regularly.

Cats in this grouping have the ability to "purr" but not "roar". (See "Purring" vs. "Roaring" Cats section in Communication.)

Purring occurs due to "imperfect ossified hyoid and undivided vocal folds". This statement refers to the twiglike hyoid bones in the neck that help to anchor the tongue in place, which, when combined with a Felinae's ability to vibrate its larynx, produces a purring sound.

No one knows why those in this subfamily developed the ability to purr, but one theory suggests the mother Felinae began to purr to help mask and camouflage the mewing sounds her vulnerable kittens made during nursing. 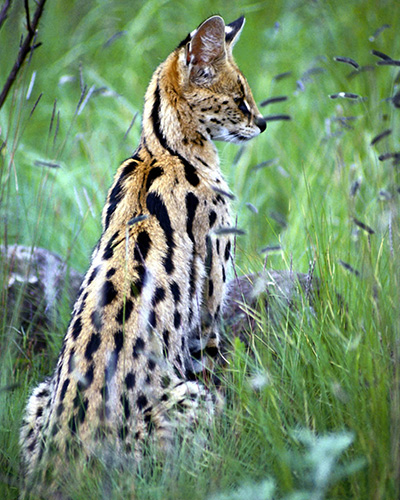 The serval (Leptailurus serval) is in the subfamily Felinae with the cheetah.

The cheetah is the only cat species in this genus as they are the only type of Felidae that cannot fully retract its claws.

There are five recognized cheetah subspecies:

"Cheetah" is derived from the Hindi word Chita, meaning "spotted one".

Acinonyx means "no move claw" in Greek — a reference to its non-retractile claws.

The hair on a cheetah is longer on the nape than elsewhere — this feature is more visible on cubs as the mane is more pronounced and extends over the head, neck, and back. The word jubatus means "mane" or "crested" in Latin — likely this is in reference to the mane found on cheetah when they are cubs. 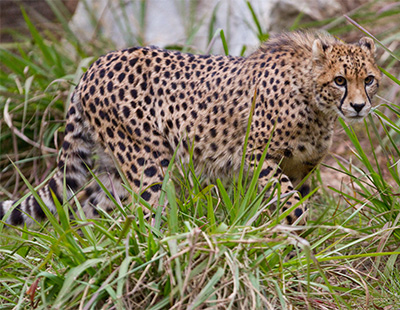 An explanation for the speed of the pronghorn may have been the presence of cheetah species which would have hunted then at one time on the North American continent.

Recent detailed DNA studies shows evidence that all living cats can be traced back to panther-like predators that existed in Southeast Asia 10.8 million years ago.

Once considered alone in separate subfamily, cheetahs have now been grouped with pumas (Puma concolor) and jaguarundis (Puma jagouaroundi) according to detailed DNA analysis. This group diverged some 6.9 million years ago.

It is believed that the cheetah may have originated in North America before spreading to Eurasia and Africa. Pronghorns, the fastest animal in North America, reaches speeds of up to 60 mph — far faster than any living North America predator including coyotes, wolves, and pumas. One explanation to their superior speed is that such acceleration was needed against the threat of previous North American cheetah species, which likely hunted them in the past.

Two extinct cheetah-like cats are known to have existed in North America — Miracinonyx inexpectata and M. trumani. Based on a nearly complete skeleton found at Hamilton Cave, West Virginia, M. inexpectata was larger than A. jubatus and had fully retractable claws. Based on hundreds of bones found at Natural Trap Cave in Wyoming, M. trumani was larger but similar to A. jubatus.

The oldest cheetah fossils, found in eastern and southern Africa, are approximately 3.5 to 3 million years old. Early fossils of A. jubatus were discovered in Northern Tanzania, Africa. A. jubatus is believed to have existed 3 million years ago, roughly the same time as the now extinct Acinonyx pardinensis, an Eurasian cheetah species that was approximately the same size as today's lion species (Panthera leo).