Cheetahs produce a variety of sounds including growls, purrs that generally denote contentment, chirps (between a mother and her cubs), and an "explosive yelp" heard by humans from 2 km (1.24 mi.) away.

Cheetah vocalizations can be further classified into one of three categories: 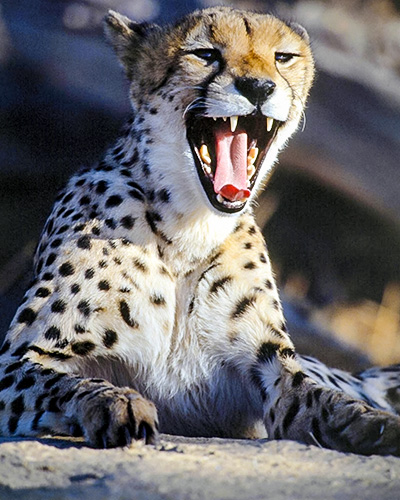 The Felidae family is subdivided between the "roaring cats" and the "purring cats" based on the work done by Owens in 1834 and 1835.

"Roaring cats" (lions, tigers, jaguars, and leopards) have an incompletely ossified hyoid, which in theory allows them to roar but not to purr.

Cheetahs belong to the "purring cats" subfamily and as such do not roar.

Many animals are said to purr, but a large 2002 study defined purring as a continuous sound production that must "alternate between pulmonic egressive and ingressive airstream (and usually go on for minutes)." Under this stricter definition, the only animals known to "purr" in this manner are felids in the "purring cat" subfamily and two species of genets (Genetta tigrina and likely Genetta genetta as well).

Cats purr during both inhalation and exhalation with a consistent pattern and frequency between 25 to 150 Hz — studies have shown that sound produced in this range can improve bone density. Cats that purr often do so as a form of communication, but cats are known to rest for long periods of time, which may lead to bone density loss and muscle atrophy. In theory, purring may also be a low energy mechanism to stimulate bone and muscle healing.

Like other members of Felidae family, male cheetahs are known to mark their territories with urine.

Items most commonly marked include objects that immediately stood out in an environment such as tree and shrubs. In an open area, plants that stood out against more common plant species tend to be marked.

Other male cheetahs, females, mothers, and cubs all took interest in the markings left by other groups.