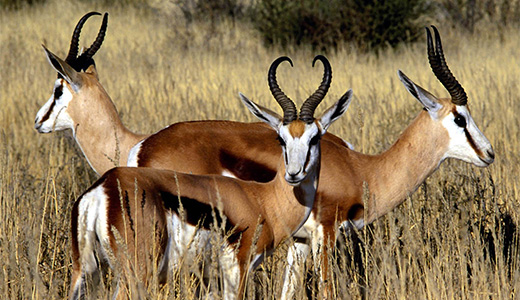 To capture prey, cheetahs are capable of accelerating from 0 to 80 km/h (50 mph) in just three strides, with a maximum speed of 110 km/h (68.35 mph) in a few seconds. However, cheetahs have little endurance so the pursuit of prey must be well timed out.

Unlike most other cats, cheetahs do not ambush their prey or attack within springing distance. Prey may be spotted within seconds or stalked for hours. When the cheetah is within 70 to 100 m (230 to 330 ft.), the chase begins. A chase lasts perhaps 20 seconds, with few pursuits exceeding one minute. The distance covered averages 170 m (550 ft.), but some may continue pursuit for about 500 m (1,640 ft.). Rarely will a cheetah attempt an attack if more than 200 m (650 ft.) away from prey.

During a fast sprint all four paws of a cheetah do not touch the ground when the legs are fully contracted under the body and as the legs become fully extended. A single stride may cover 7 m (23 ft.) — the same distance as a much larger race horse in full stride. At near maximum acceleration, a cheetah runs about one stride per 0.28 seconds or 3.5 strides per second.

Cheetahs have a curved dewclaw on their forelegs. While in pursuit, as a cheetah nears its target it will swat at and trip the prey animal with its dewclaw. 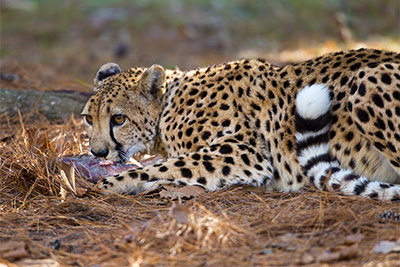 Most pursuits end in failure. However, if the cheetah makes contact it knocks down its prey and drives its small upper canine teeth into the throat to strangle/suffocate the animal to death.

Compared to other large carnivores in their area, cheetahs tend to rest through the heat of the day, concentrating their hunts later in the morning and early afternoon. This strategy may limit competition and confrontations between cheetahs and other large predators like lions and hyenas.

A cheetah may attempt to first drag a kill to a hiding spot before eating. Cheetahs rarely scavenge remains they did not kill themselves, unlike other African predators. Lions, hyenas, and even vultures will drive a cheetah away from its kill, so a cheetah must often eat quickly or flee to avoid confrontations.

Lone adults may hunt every two to five days, compared to a female with cubs that may make a kill daily. An adult cheetah eats about 6.2 lb. (2.8 kg) of meat per day. Cheetahs rarely drink — seldom do they drink more than once every four days and sometimes only once every 10 days. 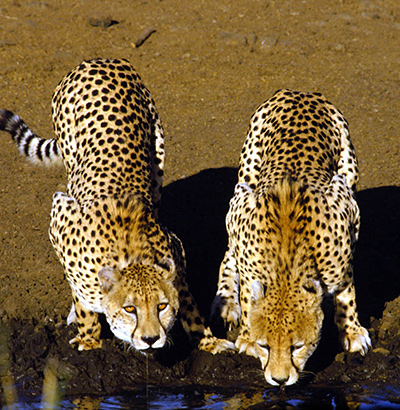