Cheetahs become sexually mature between 20 to 23 months of age, although some may mature within 18 months. Breeding occurs throughout the year. Females are polyestrous, with a typical estrous cycle lasting 12 days in which the female will be "in heat" for 1 to 3 days. Female cheetahs may mate with more than one male.

Receptive females urinate on bushes, trees, and rocks. A male that picks up on the scent calls out to the female with a series of yelps — the female responds with yelps as the male approaches. Mating may occur immediately and copulation lasts less than a minute. They may stay together for a few days and mate several more times during this period, an average of 3 to 5 times per day.

It is unknown when a female is no longer capable of bearing young, however, one was known to be reproductively active at 15 years of age. 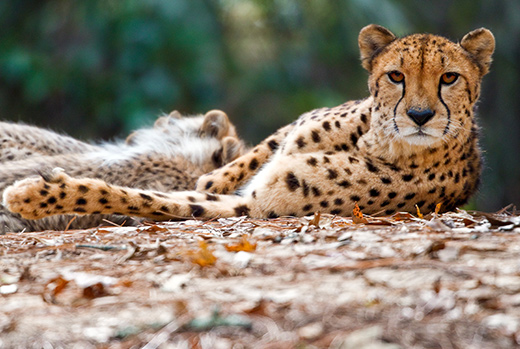