Adult male killer whales are larger overall than their female counterpart including features such as pectoral flippers, dorsal fins, tail flukes, and girth. 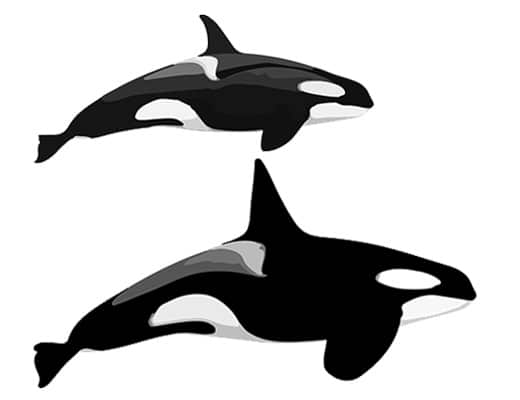 The general body shape of a killer whale is roughly cylindrical but tapering at both ends. This characteristic fusiform shape is quite energy efficient for swimming. Compared to other body shapes, this body shape creates less drag (the opposing force an object generates as it travels through water).

Killer whales are black and white, with a gray patch called a "saddle" or a "cape" on the back, just behind the dorsal fin.

The large areas of black and white are distinctly separate.

The distinctive coloration of killer whales is a type of disruptive coloration, a pattern that obscures the outline of an animal by contradicting the animal's body shape. In the flickering, filtered sunlight of the sea, other animals may not recognize a killer whale as a potential predator.

While extremely rare, white killer whales have been observed. In British Columbia, one such animal was diagnosed with Chédiak-Higashi Syndrome, an inherited fatal disorder characterized by loss of pigmentation and not surviving to adulthood. Others appear to be full-grown adults and the cause of their white coloration is unknown. 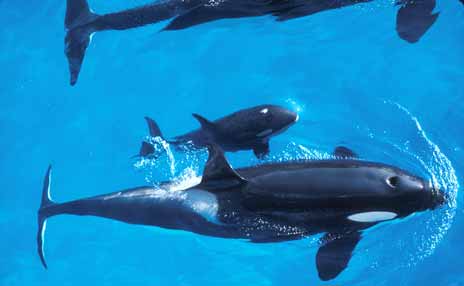 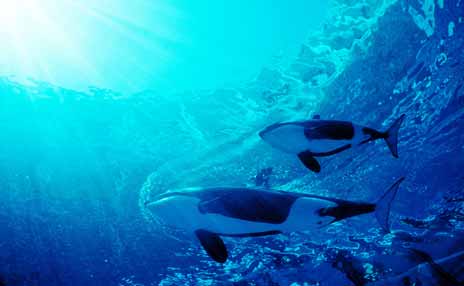 A killer whale's forelimbs are adapted for swimming. A killer whales uses its rounded, paddlelike pectoral flippers to steer and, with the help of the flukes, to stop.

A killer whale's pectoral flipper contains 5 digits much like the fingers on a human hand. 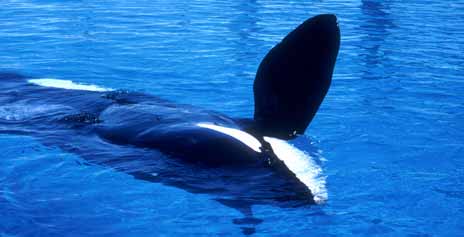 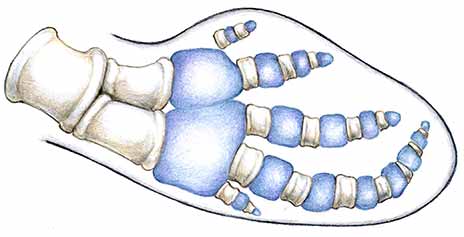 Each lobe of the two-lobed tail is called a fluke. Flukes are flat pads of tough, dense, fibrous connective tissue, completely without bone or cartilage.

Although killer whales have 50 to 54 vertebrae, no bones extend into the flukes. Without bones or even cartilage in the flukes, it is not unusual to see them curved, especially in larger males.

A large male killer whale may have tail flukes measuring 2.75 m (9 ft.) from tip to tip.

Longitudinal muscles in the back one-third of the body (both above and below the spine) move the flukes up and down. 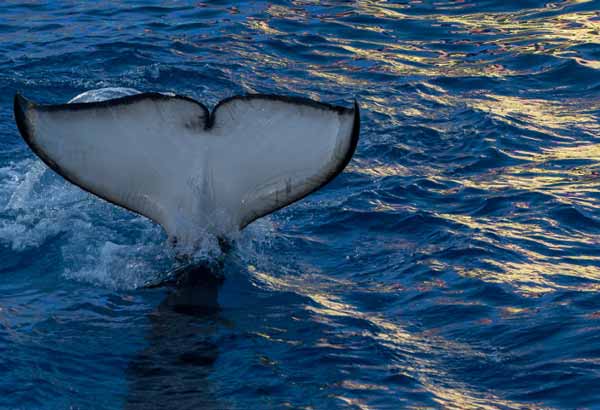 Like the flukes, the dorsal fin is made of dense, fibrous connective tissue, without bones or cartilage.

The dorsal fin of a male killer whale is proportionately larger than that of a female.

As in the flukes and the flippers, arteries in the dorsal fin are surrounded by veins to help maintain body temperature.

Like the keel of a boat, the dorsal fin may help stabilize a killer whale as it swims at high speeds, but a fin is not essential to a whale's balance. 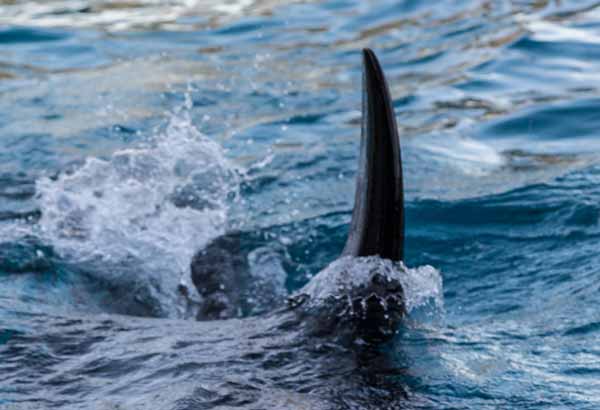 Dorsal fin irregularities in killer whales observed in ocean are rarely seen, however, some have irregular-shaped dorsal fins: they may be curved, wavy, twisted, scarred, or bent. This may occur in male or female dorsal fins.

It is not fully understood why wild killer whale populations develop abnormal dorsal fins or why the observed killer whale males around New Zealand had such a high rate of dorsal fin abnormalities compared to other studied populations. Researcher theories include these observed abnormalities may be attributed to age, stress, and/or attacks from other killer whales. However, as killer whales at SeaWorld tend to spend more time at the surface working with their trainers, and many of the males have slumped or bent dorsal fins, it seems probable that time spent at the surface may be a contributing factor.

Killer whales in the Eastern Tropical Pacific tend to have barnacles (Xenobalanus spp.) attached to the back edge of their dorsal fins. 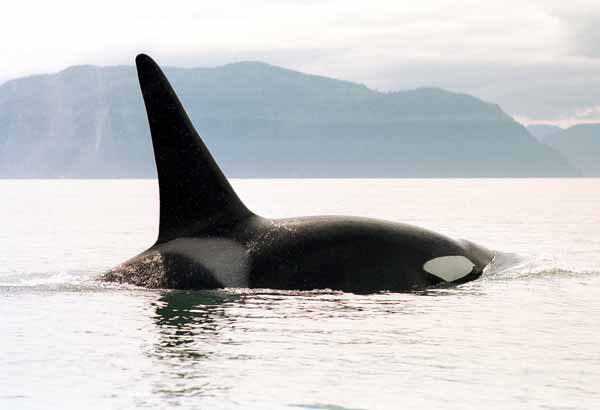 A killer whale has an indistinct rostrum (snout-like projection).

A killer whale's eyes are on each side of its head, just behind and above the corner of its mouth, and in front of its white eyespot.

A killer whale's eyes are about the same size as the eyes of a cow. Glands at the inner corners of the eye sockets secrete an oily, jellylike mucus that lubricates the eyes, washes away debris, and probably helps streamline the eyes as a killer whale swims.

Ears are small inconspicuous dimples just behind each eye, with no external flaps or pinnae. These small external ear openings lead to reduced ear canals that are not connected to the middle ears. 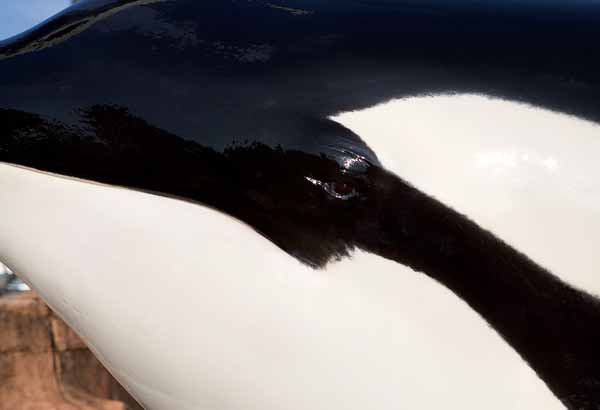 A killer whale's large teeth are conical and interlocking. Toothed whales have only one set of teeth; they are not replaced once lost. 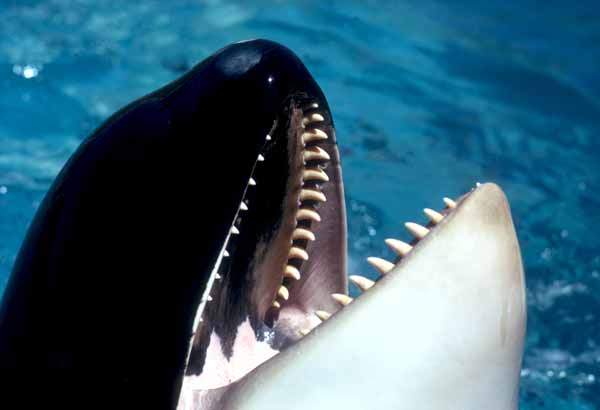 The number of teeth varies among individuals. There are usually 10 to 14 teeth on each side of each jaw (40 to 56 teeth total).

A killer whale does not chew its food — instead its teeth are adapted to grasp prey and tear its food into smaller chunks.

The teeth of killer whales begin to erupt from several to 11 weeks of age, which corresponds with the time that calves are seen taking solid food from their mothers. 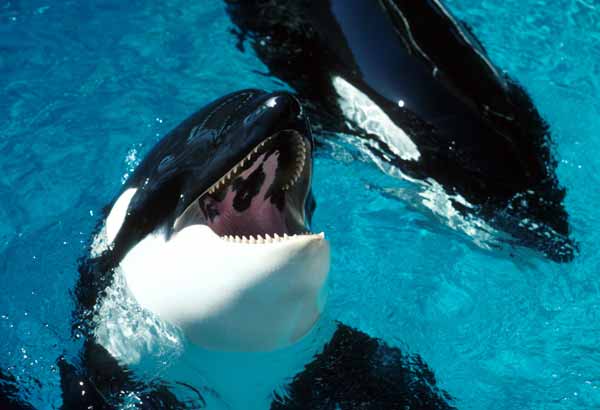 Extensive wear has been noted on the teeth of older individuals. Most adult North Atlantic type 1 killer whales have severely, worn-down teeth, which is consistent with a diet of suctioning up small fishes. Adult offshore killer whales in the Northeast Pacific also have highly worn teeth, likely caused by a diet that includes sharks with highly abrasive skin.

A killer whale's blubber layer lies beneath the dermis and measures from 7.6 to 10 cm (3 to 4 in.) thick. Blubber is a layer of fat reinforced by collagen and elastic fibers. In general, blubber has a number of important functions:

A killer whale's dermis (skin) is smooth. The outer layer continually and rapidly renews itself, and the old skin sloughs off. 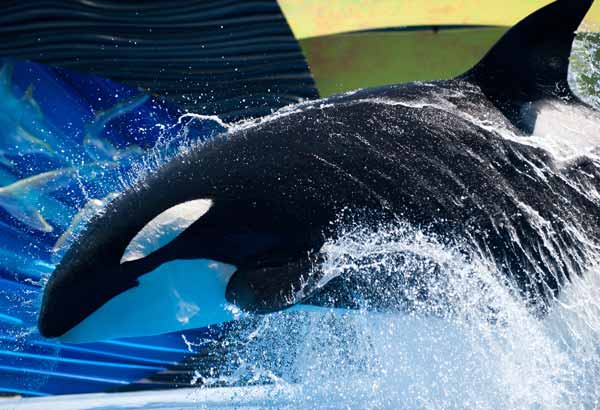 The five forms of Antarctic killer whales look different and are easier to tell apart.

Of the groups of killer whales studied, researchers have learned to recognize many individual killer whales from photographs, especially photos of the dorsal fin and saddle patch. 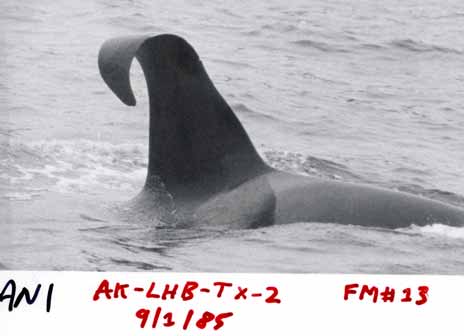 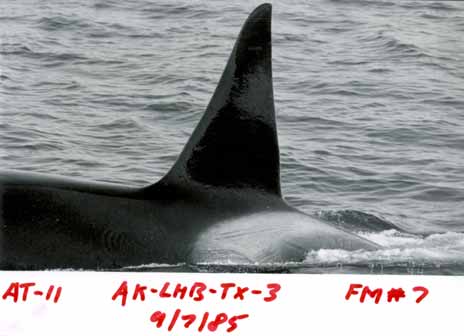