Penguins may spend several months at a time at sea, only coming ashore for breeding and molting. The Fiordland crested penguins occasionally grow barnacles on their tails — an indication that they are at sea for long periods.

Earlier estimates of swimming speeds were taken from observations of penguins swimming alongside moving ships, a method that proved to be unreliable.

A penguin hunches its head into its shoulders to maintain its streamlined shape and reduce drag while swimming. Its keeps its feet pressed close to the body against the tail to aid in steering.

Penguin wings are paddle-like flippers used for swimming. The motion of the flippers resembles the wing movements of flying birds, giving penguins the appearance of flying through water. The wing and breast muscles are well developed, to propel penguins through water - a medium much denser than air. 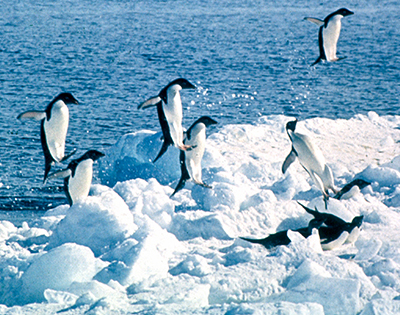 Not only do they "fly" underwater, these Adélie penguins appear to "fly" out of the water easily jumping 1.8 m (6 ft.) into the air. This behavior is commonly seen when penguins come ashore onto rough or high terrain such as ice floes and rocky shorelines.

Although it is more energy efficient for penguins to swim under water than at the water's surface, they must come to the surface to breathe. Many species of penguin porpoise--leap in and out of the water, like dolphins or porpoises.

Most prey of penguins inhabit the upper water layers, so penguins generally do not dive to great depths or for long periods.

Most species stay submerged less than a minute. 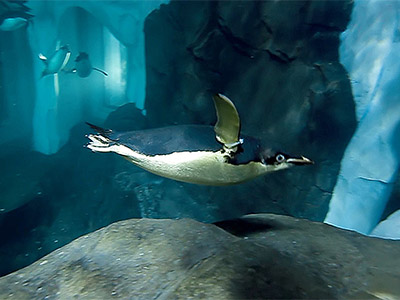 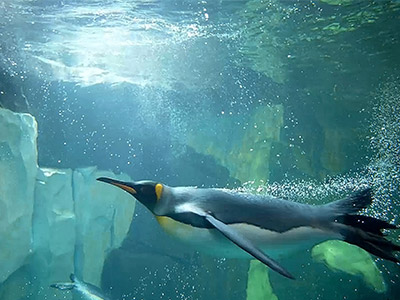 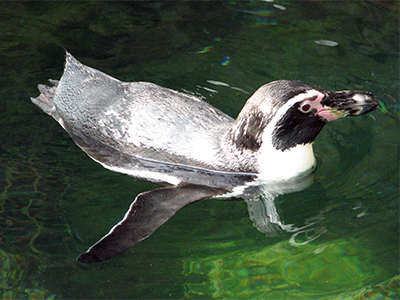 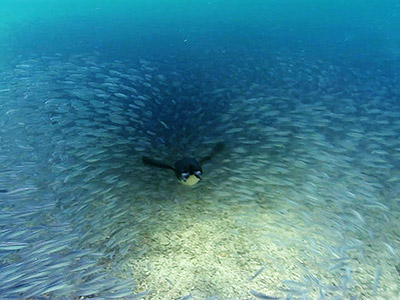 Penguins mainly hunt prey in pelagic (open ocean) waters, however sparse evidence (such as stomach content analysis) suggests that gentoo, yellow-eyed, and emperor penguins dive and feed at the benthic (ocean floor) level as well. However, a detailed dive study of southern rockhoppers nesting/feeding off the coastal waters of the Kerguelen Archipelago suggest that benthic feeding is an important part of their diets. 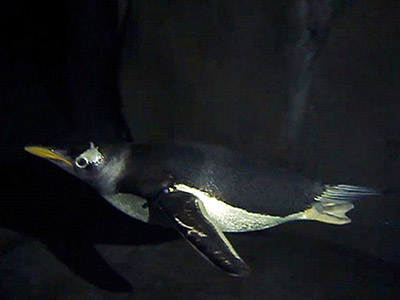 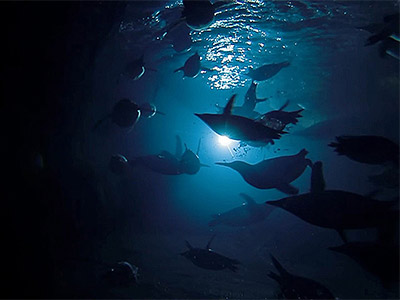 Synchronized diving has been seen for northern rockhopper and Adélie penguins. The behavior is poorly understood and observed only at the surface of the water, although individuals were fitted with time/depth recorders so additional underwater data was recorded and analyzed as part of these studies.

The temperatures of a penguin's peripheral areas (limbs and skin) drop during a dive while those of the core regions (heart, deep veins, and pectoral muscle) are maintained at the normal temperature. 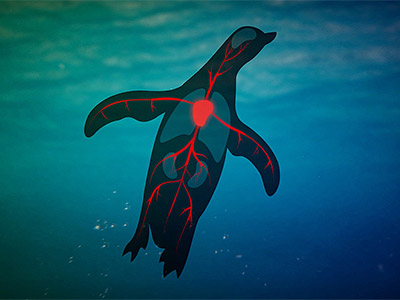 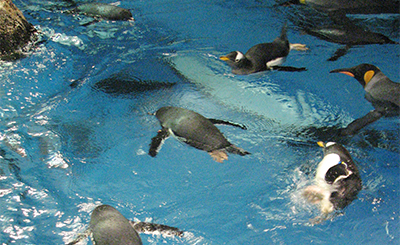 Penguins have glands under the eyes that help rid the body of excess salt. The secretion of salt and fluid often collect as droplets on the bill and are shaken off. These glands are so effective that penguins can drink sea water without ill effects.

A penguin typically sleeps with its bill tucked behind a flipper, which some scientists believe serves no known purpose in penguins, but is a remnant of ancestral relations to flighted birds. Other researchers believe the behavior may reduce the amount of heat lost through the face, particularly the nostrils.

To conserve energy while fasting, penguins may increase the time they spend sleeping.

During the Antarctic winter, when the period of darkness may last more than 20 hours, huddling emperor penguins that are incubating eggs may sleep for most of a 24-hour period.

Penguins living in the coldest regions have longer feathers and thicker body fat than those living in warmer regions.

Overlapping feathers create a surface nearly impenetrable to wind or water. Feathers provide waterproofing critical to penguins' survival in water that may be as cold as -2.2°C (28°F) in the Antarctic. Tufts of down on feather shafts trap air. This layer of air provides 80% to 84% of the thermal insulation for penguins. The layer of trapped air is compressed during dives and can dissipate after prolonged diving. Penguins rearrange their feathers by preening.

To conserve heat, penguins may tuck in their flippers close to their bodies. They also may shiver to generate additional heat.

A well defined fat layer improves insulation in cold water, but probably is not enough to keep body temperature stable at sea for long. Penguins must remain active while in water to generate body heat.

Species in colder climates tend to have longer feathers and a thicker fat layer than those in warmer climates. An emperor penguin can build up a 3 cm (1.2 in.) thick fat layer before the breeding season.

Penguins warm up by turning their dark colored backs to the sun.

One of the methods penguins use to conserve body heat is huddling.

The dark plumage of a penguin's dorsal surface absorbs heat from the Sun, which increases body temperature.

On land, king and emperor penguins tip up their feet, and rest their entire weight on their heels and tail, reducing contact with the icy surface.

During storms, emperor penguins huddle together to conserve. As many as 6,000 males will cluster while incubating eggs during the middle of the Antarctic winter. The penguins on the boundaries of the huddle continually move into the more sheltered interior, giving each penguin in the huddle equal access to warmth and benefit from huddling.

Emperor penguins are able to recapture 80% of heat escaping in their breath through a complex heat exchange system in their nasal passages.

On land, overheating may sometimes be a problem.

Penguins that live in warmer climates - like the Magellanic - have bare patches of skin around the bill and eyes to help release excess body heat.

Penguins that live in cold climates - like the Adélie - have feathers covering most of their bills to help conserve body heat.