Penguins eat krill (a shrimp-like crustacean in the family Euphausiidae), squids, and fishes. Various species of penguins have slightly different food preferences, which reduce competition among species. (See Appendix for information on diet for each species.)

The smaller penguin species of the Antarctic and the subantarctic primarily feed on krill and squids. Species found farther north tend to eat fishes.

Intake varies with the quantity and variety of food available from different areas at different times of the year.

Method of Collecting and Eating Food

Penguins primarily rely on their vision while hunting. It is not known how penguins locate prey in the darkness, at night, or at great depths. Some scientists hypothesize that penguins are helped by the bioluminescence (light producing) capabilities of many oceanic squids, crustaceans, and fishes.

Penguins catch prey with their bills and swallow it whole while swimming. A penguin has a spiny tongue and powerful jaws to grip slippery prey.

Different species travel various distances from the colony in search of food.

Fish predators (piscivores) are likely more effective at chasing and catching individuals, thus schooling fish may form dense aggregations as a defensive strategy against predators. In tests, schooling fish such as Cape anchovies are known to depolarize (break apart) when shown models with stripes compared to models without stripes.

Adult penguins in the genus Spheniscus have at least one black stripe around their bodies. It is believed that such a conspicuous marking may force individual prey fish away from the main school, potentially increasing the penguin's hunting efficiency.

The absence of such striping patterns in other penguin genera that do not concentrate on schooling fishes as part of their diet further supports this theory. 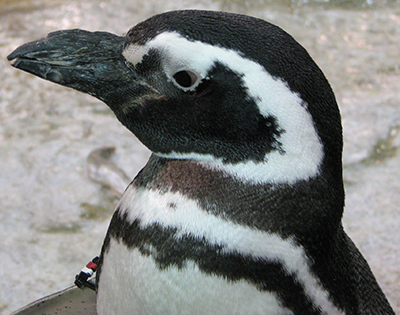 One emperor was found to have 4.5 kg (10 lb.) of stones in its stomach contents. Stones have also been found in the stomach contents of Adélie, African, gentoo, Magellanic, and yellow-eyed penguins. Whether these stones were ingested by accident or not is unknown in these cases, however, king, rockhopper, and macaroni penguins have been clearly observed swallowing stones on purpose, sometimes in great numbers.

It's theorized that stones are swallowed to reduce buoyancy while diving or to alleviate the sensation of hunger. It's also believed that rockhopper and macaroni chicks swallow stones to aid in the digestion of tough exoskeletons of the crustaceans that play an important part of their diets.

King penguins in apparent good physical condition, breeding at Marion Island, were seen to purposely look for nearby stones. A single stone, approximately 10-mm to 30-mm in diameter, was selected at a time. The king would then throw its head back and allow the stone to be swallowed. The kings averaged swallowing six to 24 stones per minute, with one ingesting 31 stones in total.

Penguins go through annual fasting periods. Prior to fasting, penguins build up a fat layer, which provides energy.

The length of fasting depends on penguin species, sex, and type of fasting. The king and emperor penguins have the longest fasting periods.