In general, flightless penguins have greater limits on foraging ranges and search capacities compared to birds that can fly. Thus to be successful, penguins must find predictable food sources within their limited foraging range. The more northernly Spheniscus penguin species, for example, are limited in distribution to primarily highly productive areas of the ocean such as upswellings and continental shelves.

About 95% of Galápagos penguins, the most northernly of all penguin species, is found along the western coast of Isabela and around Fernandina Island by the most productive upswellings caused by the Equatorial Undercurrent (also called the Cromwell Current). 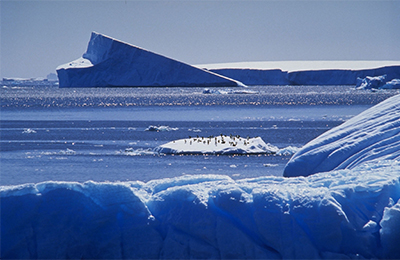 Penguins generally live on islands and remote continental regions free from land predators, where their inability to fly is not detrimental to their survival.

These highly specialized marine birds are adapted to living at sea — some species spend months at a time at sea. Penguins are usually found near nutrient-rich, cold-water currents that provide an abundant supply of food.

Different species thrive in varying climates, ranging from Galápagos penguins on tropical islands at the equator to emperor penguins restricted to the pack ice and waters of Antarctica.

The most southerly penguin colony in the world are a group of Adélies that regularly nest near Camp Royds, Antarctica. 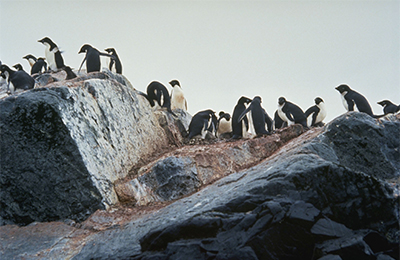 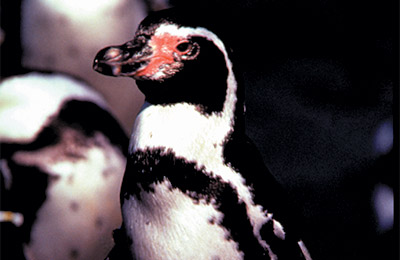 Adult penguins of most species usually disperse from rookeries (nesting colonies) to feed in coastal waters.

Adélie penguins in the southernmost breeding colonies in the Ross Sea migrate as much as 17,600 km (10,936 mi.) each year.

Young birds usually disperse when they leave their colonies and may wander thousands of kilometers. They generally return to the colonies where they were hatched to molt and breed.

Population data usually are gathered during the breeding season. Some researchers count chicks to estimate the total population, others count breeding pairs. (See Appendix for information on population estimates for each species.)