The average life expectancy of penguins is probably 15 to 20 years. Some individuals live considerably longer.

High mortality occurs among the young.

When in the water, penguins may be eaten by leopard seals, fur seals, sea lions, sharks, or killer whales.

On land, foxes, snakes, and introduced predators such as feral dogs, cats, and stoats (members of the weasel family) prey on eggs and chicks of some penguin species, including the yellow-eyed and Galápagos penguins. 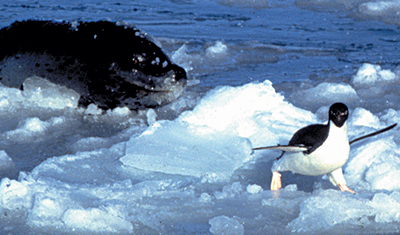 This leopard seal (Hydrurga leptonyx) is one of the primary predators of penguins but poses more of a threat in the water than on land.

Antarctic and subantarctic eggs and chicks are susceptible to predatory birds such as antarctic skuas, sheathbills, and giant petrels. These predators may prey on chicks that have strayed from the protection of the crèche or are sickly and too weak to defend themselves. 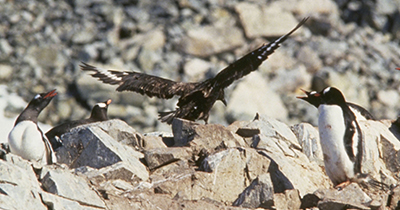 Little penguins rely on burrows and a nocturnal lifestyle to avoid predators such as swamp harriers, peregrines, gulls, snakes, rats, and lizards.

During a nine-season study off Ross Island, home to a breeding colony of some 130,000 pairs of Adélie penguins, killer whales were observed harassing, chasing, herding, and surrounding Adélies in the water but never consuming them.

Introduced predators including cats, ferrets, and stoats that eat chicks and eggs, and dogs that prey on adults pose the largest threat to yellow-eyed penguin populations.

The introduction of predators has had devastating effects in some areas. Rats, cats, dogs, pigs, and ferrets have been known to prey on chicks, eggs, and even adult penguins. Introduced herbivores, such as sheep and rabbits, cause serious deterioration of habitat.

Penguins require sea ice for nesting and feeding areas. Sea ice also provides shelter and food for many species that penguins prey on. 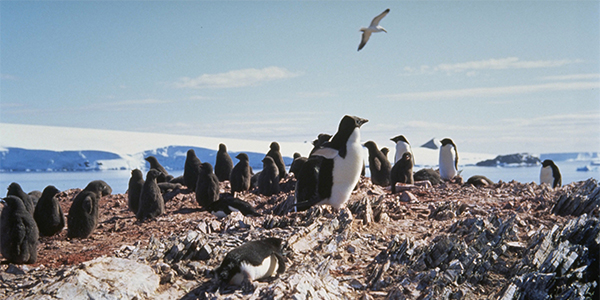 Adélie penguins begin nesting in October (austral spring) on land in snow free areas with gently sloping beaches and with plenty of small rocks to use in constructing their nests. They also require loose pack ice or areas of open water within the pack ice that are relatively near the rookery as a place to find food while they care for their chicks. 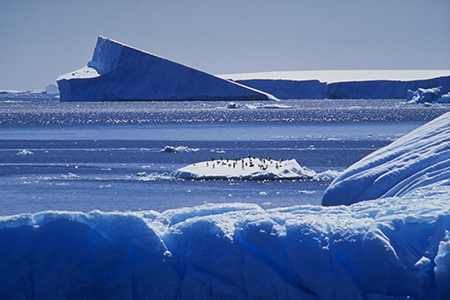 During the Antarctic summer, Adélie and chinstrap penguins use ice floes as a feeding platform: they search beneath ice for krill and fishes and rest on the ice between meals. 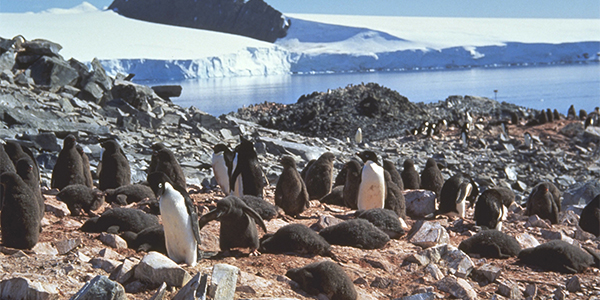 If the average global temperature rise is kept below 2°C (4°F), penguin colonies—particularly those in the Antarctic—could be sustained into the future. 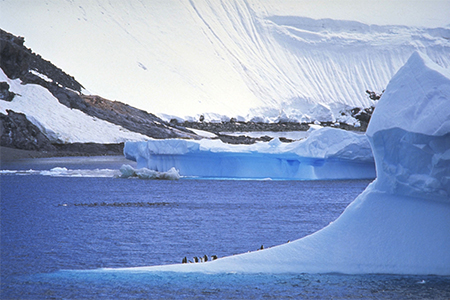 Oil fouls penguin feathers, reducing the waterproofing and insulating properties of their plumage. The birds become susceptible to hypothermia (chilling). Penguins also ingest the oil while trying to preen, which poisons them and causes internal organ damage.

In the 1980s and early 1990s, more than 40,000 Magellanic penguins were oiled each year in the Punta Tombo colony in Argentina. During this time, many oil tankers illegally dumped their ballast water, which was contaminated with petroleum. The number of oiled penguins has significantly decreased in the Punta Tombo colony with both reductions in the dumping of ballast water and a change in tanker shipping lanes. Large numbers of penguins that overwinter in the waters off northern Argentina, Uruguay, and southern Brazil are still oiled from oil-contaminated ballast water.

On June 23, 2000 the ore carrier Treasure caused an oil spill near Robben and Dassen islands off South Africa. The International Fund for Animal Welfare's (IFAW) International Oiled Wildlife Response Team, directed by the International Bird Rescue Research Center (IBRRC), was immediately mobilized to South Africa to help care for more than 20,000 oiled penguins, with 90% of these penguins successfully released following rehabilitation. Survival rates of oiled penguins that were cleaned, rehabilitated and returned to the wild were nearly the same as unoiled birds.

On Oct. 5, 2011 the container ship, the CV Rena, ran aground on Astrolabe Reef, in the Bay of Plenty, New Zealand spilling several hundred tons of fuel into the surrounding waters. Although, about 2,000 seabirds died as a result of the spill, 383 little penguins and 37 other types of seabirds were rescued. Of the rescued, penguins, 95% were returned to the wild after being cleaned and cared for. Researchers involved in monitoring the little penguin colonies found a normal nesting rate for rescued, de-oiled, and returned penguins.

Members of SeaWorld's Aviculture Departments have helped clean and care for oiled penguins in the Treasure and Rena oil spills and also other penguin rescue efforts. 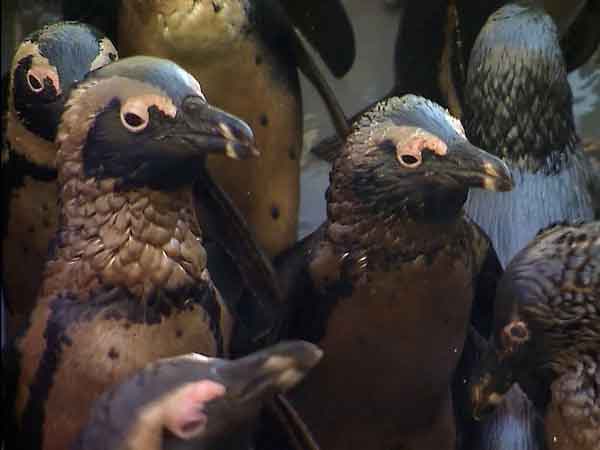 Oil-covered penguins from the Treasure oil spill waiting to be cleaned.

Traces of contaminants including brominated flame retardants and persistent organic pollutants (POPs) including dichlorodiphenyltrichloroethane (DDT), polychlorinated biphenyls (PCBs), and other pesticides (chlorinated hydrocarbons) have been found in the tissues of krill, penguins, and other types of Antarctic wildlife and ice algae.

The popularity of "ecotourism" is increasing with cruise ships frequenting antarctic waters. Enthusiastic sightseers must be careful not to interfere with normal penguin activity by staying back and keeping noise levels down. 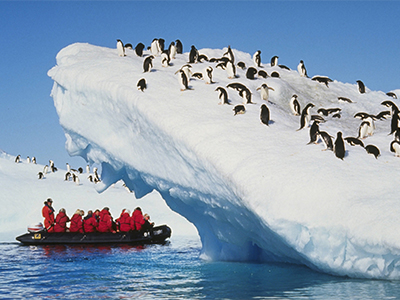 The El Niño Southern Oscillation (ENSO) is a natural phenomenon that involves a change in wind and ocean current patterns, which warms surface temperatures and reduces the upwelling of nutrient-rich water. A decrease in nutrients affects plankton, krill, and small fishes, which comprise the food supply for marine animals. The penguin species most affected are the Humboldt and Galápagos penguins.