Sea turtles are not generally considered social animals; however, some species do congregate offshore.

Sea turtles gather together to mate. Members of some species travel together to nesting grounds.

After hatchlings reach the water they generally remain solitary until they mate.

Little is known about the individual behavior of sea turtle species.

In the ocean, flatback turtles may spend hours at the surface floating, apparently asleep or basking in the sun. Frequently, seabirds perch on the backs of the flatbacks.

Olive ridleys have been observed basking on beaches, and it is not unusual to see thousands of olive ridleys floating in front of the nesting beaches.

Leatherback turtles tend to dive in a cycle that follows the daily rising and sinking of the dense layer of plankton and jellyfish. The turtles probably feed in the upper layers of water at night. As dawn approaches, their dives become deeper as the plankton and jellyfish retreat to deeper water, away from the light of day. The turtles bask at the surface at midday when the layer sinks beyond their typical diving range. As dusk approaches, the turtles' dives become shallower as the layer rises.

Hawksbill and green turtles often return to rest in the same spot each night. 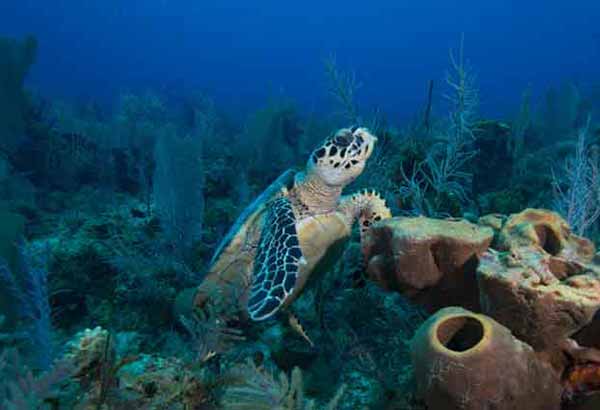