Diet varies with species. Sea turtles may be carnivorous (meat eating), herbivorous (plant eating), or omnivorous (eating both meat and plants). The jaw structure of many species indicates their diet.

Some species change eating habits as they age. For example, green sea turtles are mainly carnivorous from hatching until juvenile size; then progressively shift to an herbivorous diet.

Green sea turtles have finely serrated jaws adapted for a mostly vegetarian diet of sea grasses and algae. As adults, these are the only predominantly herbivorous sea turtles; although some occasionally also dine on jellyfish and sponges. 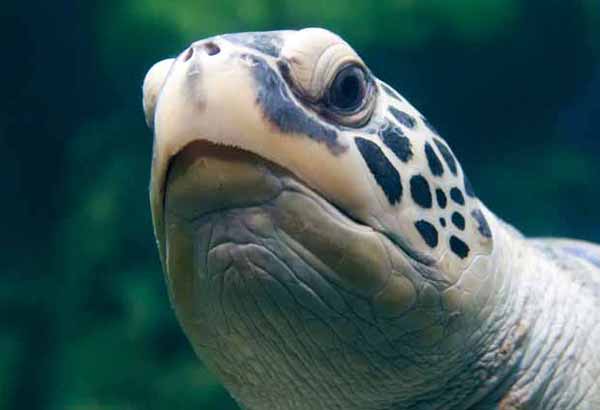 Some species change eating habits as they age. For example, green sea turtles are mainly carnivorous from hatching until juvenile size; they then progressively shift to an herbivorous diet.

A hawksbill has a narrow head with jaws meeting at an acute angle, adapted for getting food from crevices in coral reefs. They mainly eat sponges, but also occasionally a small amount of tunicates, shrimps and squids. 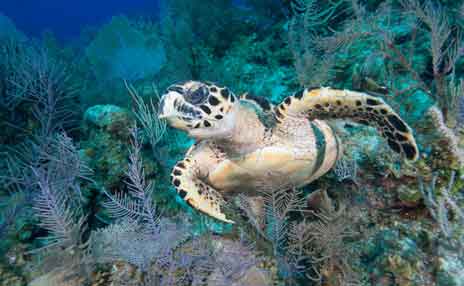 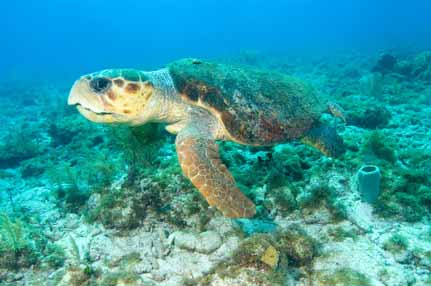 The hawksbill sea turtle has a narrow head adapted for getting food from crevices in coral reefs.  The jaws of a loggerhead sea turtle are adapted for crushing and grinding.

Loggerheads', Kemp's ridleys', and olive ridleys  have jaws that are well adapted for crushing and grinding. Their diet consists primarily of crabs, mollusks, shrimps, jellyfish, and vegetation.

Leatherbacks have delicate scissor-like jaws that would be damaged by anything other than their normal diet of jellyfish, tunicates, and other soft-bodied animals. The mouth cavity and throat are lined with papillae (spine-like projections) pointed backward to help them swallow soft foods.