Like other reptiles, the sea turtle ear has a single bone in the middle ear that conducts vibrations to the inner ear. Researchers have found that sea turtles respond to low frequency sounds and vibrations.

Sea turtles can see well under water but are shortsighted in the air.

Sea turtles can see near-ultraviolet, violet, blue-green and yellow light. They are not sensitive to light in the orange to red range of the visible spectrum. 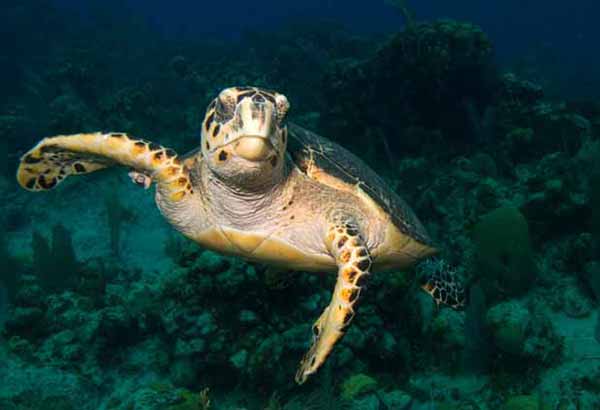 A sea turtle is sensitive to touch on the soft parts of its flippers and on its shell.

Little is known about a sea turtle's sense of taste.

Most researchers believe that sea turtles have an acute sense of smell in the water. Experiments show that hatchlings react to the scent of shrimp. This adaptation helps sea turtles to locate food in murky water.

A sea turtle opens its mouth slightly and draws in water through the nose. It then immediately empties the water out again through the mouth. Pulsating movements of the throat are thought to be associated with smelling.

Sea turtles have an internal compass, which hatchlings use to orient to the Earth’s magnetic field after they swim through the surf zone. Adults may also use magnetic information to navigate.