Recording the movements of tagged sharks suggest that most sharks undergo daily activity rhythms. Their greatest activity occur during the twilight and dark hours.

Pilotfish (usually Naucrates ductor, but there are others) often travel with sharks, for unclear reasons. The relationship may be due to the natural schooling behavior of the pilotfish, or the pilotfish may conserve energy by riding the hydrodynamic bow wake of the shark. Pilotfish also eat small amounts of food scraps released as the shark feeds.

Several species of small fishes, notably the cleaner wrasse (Labroides dimidiatus), are "cleaners" that pick debris and parasites from sharks.

Parasites of sharks and batoids are mainly copepods and flatworms. 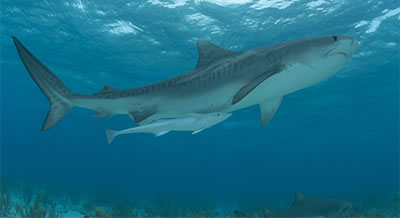 Only 32 species of sharks have been identified with attacks on humans or boats. These species have three features in common: they prey on fish or marine mammals, grow to a large size, and frequent warmer coastal waters where swimmers are apt to be.

An analysis of 1,000 recent shark attacks world-wide showed that well over 50% of the attacks were not feeding-related.

Up to 60% of shark attack injuries are slashes of the upper jaw teeth. This behavior is typical of courtship advances by some male sharks.

Sharks may also injure victims by bumping them vigorously, but mostly sharks move in cautiously when attacking.

A great white shark rushes towards its prey, attacking from beneath and behind. These sharks rely on stealth and surprise to prey on seals, sea lions, and other marine mammals. 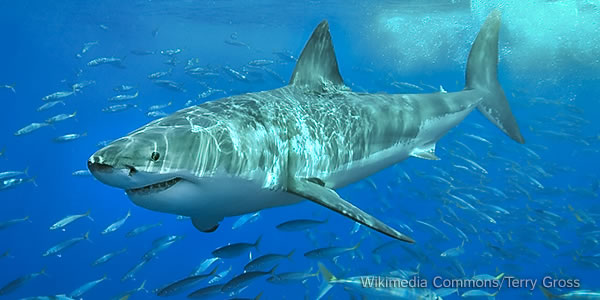 From 1990 to 1996, there were 49 unprovoked attacks reported per year with 6.3 deaths on average. This is consistent with the belief that there are between 50 to 100 shark attacks with only 5 to 10 fatalities per year.

More people are killed every year by bees, elephants, dogs, lightning bolts, and pigs than by sharks.

There is no known effective shark deterrent.