The largest of the sharks is the whale shark (Rhiniodon typus). Although the whale shark averages 4 to 12 m (13-39 ft.) in length, one specimen was found to be 18 m (59 ft.) long. The smallest free-swimming whale shark observed was 56 cm (22 in.) which may be close to its birth size.

Whale sharks (Rhiniodon typus) can be as big as two school buses or more.

For most shark species, females grow around 25% larger than males.

The largest batoid is the manta ray (Manta birostris) which reaches widths more than 6.7 m (22 ft.).

Sharks typically have a fusiform body (rounded and tapered at both ends). This shape reduces drag and requires a minimum amount of energy to swim.

Wobbegong sharks (Family Orectolobidae) and angelsharks (Family Squatinidae) have a flatter appearance than most sharks. Batoids are flattened, with a ventral mouth and gill openings. 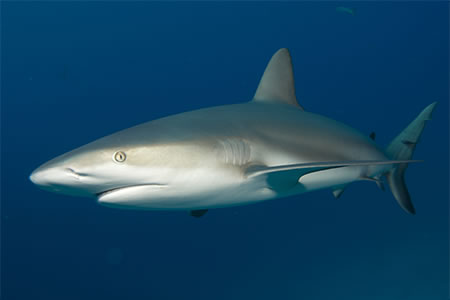 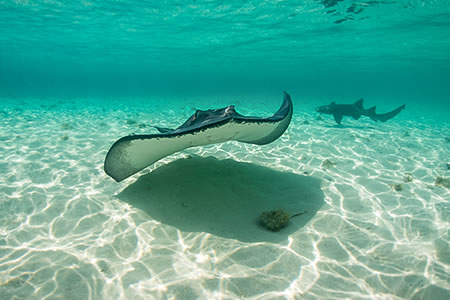 The spined pygmy shark has dense photophores covering its ventral surface but little or none on its sides or top of the body. This bioluminescent pattern has been described as "photophore countershading". On a moonlit night, fish swimming through the water would normally produce a shadow that predators would see. The glowing underside of the spined pygmy shark reduces or eliminates this shadow, making it less conspicuous to predators.

Some sharks and batoids are camouflaged to blend in with the ocean bottom. 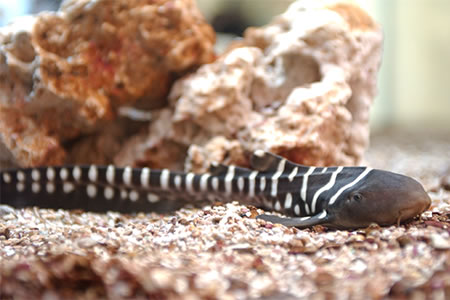 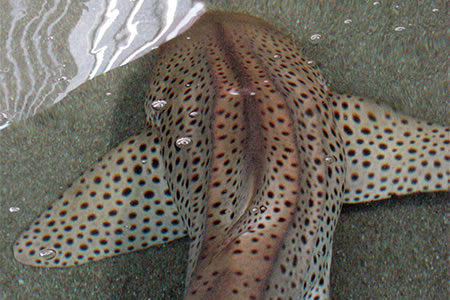 The markings of some species change as the shark ages. For instance, young zebra sharks (Stegostoma fasciatum) have dark bands and saddles that fade to rather uniformly distributed spots on adult sharks. Adult Stegostoma fasciatum are called Australian leopard sharks.

Most sharks have five different types of fins. 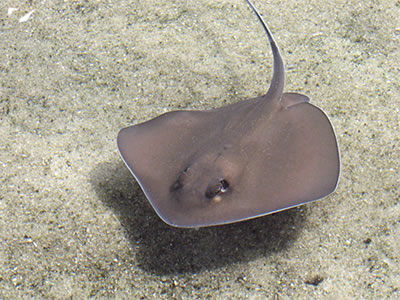 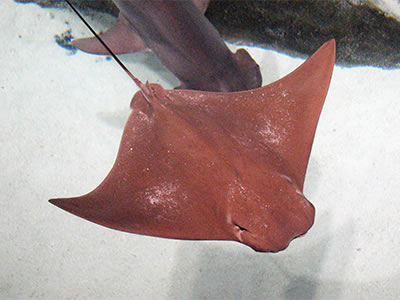 Eyes are lateral on sharks, dorsal on batoids.

Eye size and position vary, depending on the particular habitat or behavior of the species. In general, deep-water sharks have bigger eyes than shallow-water sharks. 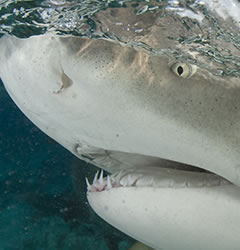 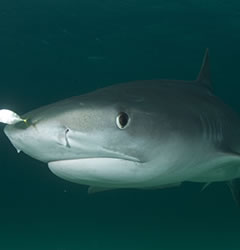 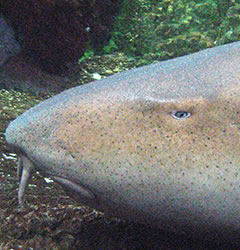 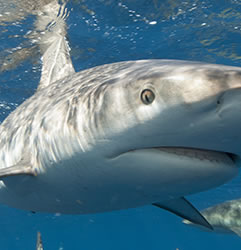 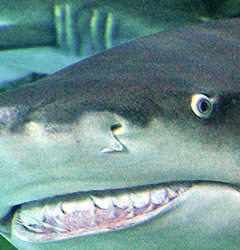 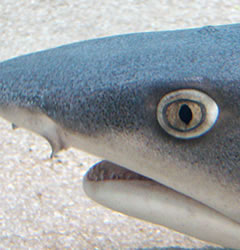 Some species have barbels near the nostrils. 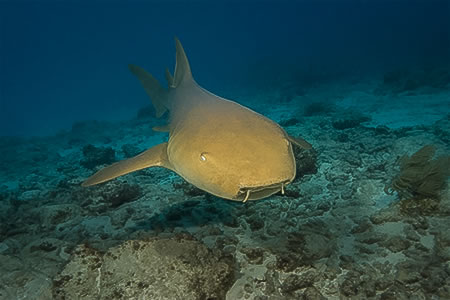 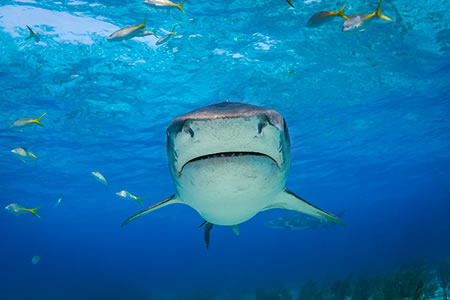 On both sharks and batoids, the mouth is usually ventral. It is located at the tip of the snout in the whale shark, megamouth shark (Megachasma pelagios), frilled sharks (Chlamydoselachus spp.), and in the carpet sharks (Family Parascylliidae).

The mouth may have labial folds or furrows. 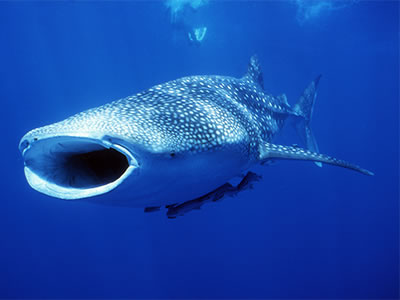 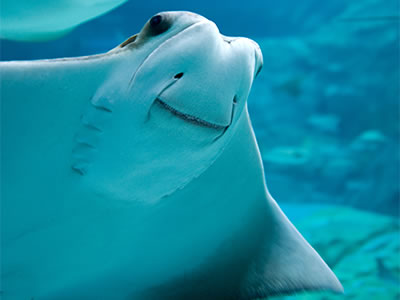 Some species of sharks may shed as many as 30,000 teeth in a lifetime. 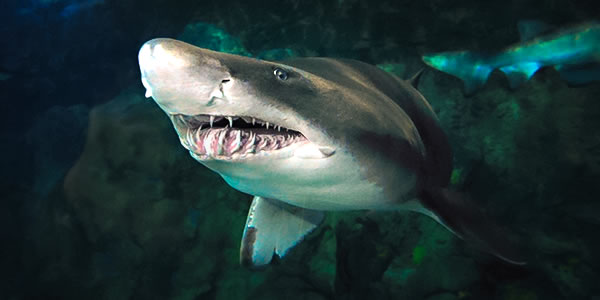 Sharks have five to seven pairs of lateral gill slits.

Batoids have five or six pairs of ventral gill slits.

Some species of elasmobranchs have small openings called spiracles behind the eyes at the top of the head. These openings bring oxygen-carrying water into the gill chamber. Spiracles originate from rudimentary first gill slits and are reduced or absent in active, fast-swimming sharks. 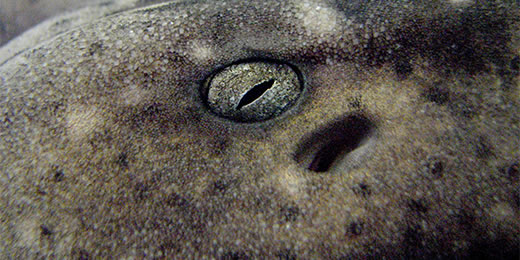 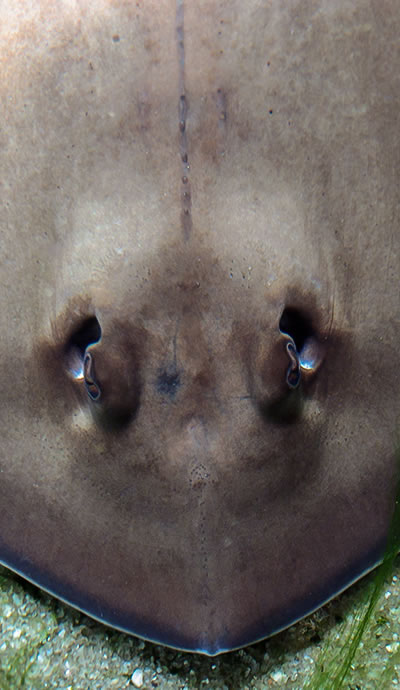 Like teeth, the shape of the scales is variable among species and can be used to identify the species. 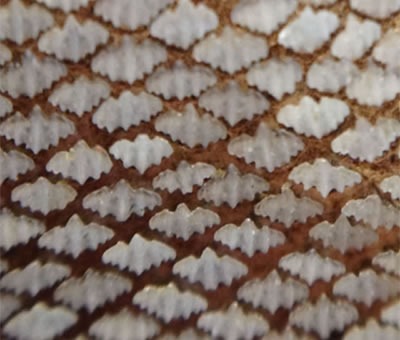 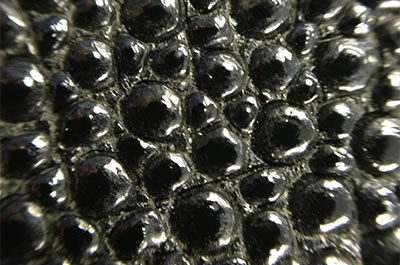 Placoid scales may also create drag when compared to other animals. The drag on a brown shark (Carcharhinus plumbeus) is up to ten times greater than the smooth and sleek skin of a dolphin.

Shark skin is still used as sandpaper (called shagreen). If the denticles are removed, shark skin is used to make leather products. 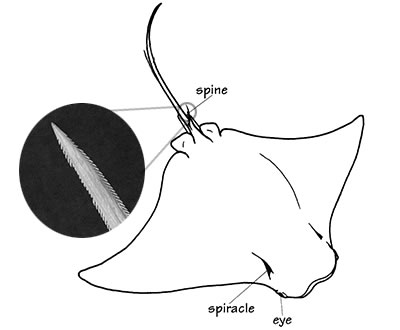 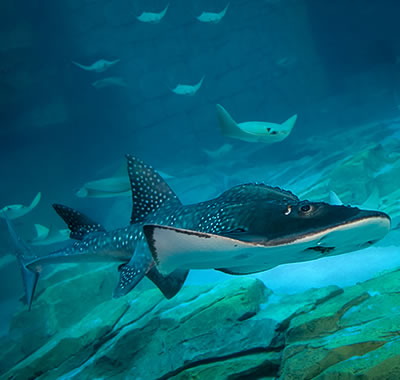 Most rays (Order Myliobatiformes) have one or more venomous spines on the tail. Spines are an adaptation for defending the animal against predators and are not used aggressively. Shallow-water species do, however, pose a risk to unwary bathers because if a ray is disturbed, its natural reaction is to lift its spine.

Skates (Family Rajidae) and guitarfish (Family Rhinobatidae) may have rows of short spines or prickles on the back.

Some shark species, such as horn sharks and dogfishes, have spines associated with their dorsal fins. These spines are an adaptation for defense against predators.

Piked dogfish (Squalus acanthias) have dorsal spines equipped with an irritating toxin. When threatened, piked dogfish curl up and whip their longer second dorsal spine towards an enemy. The toxin can cause allergic reactions in humans that may require hospitalization.