Over the years, millions of people have visited zoological parks such as the SeaWorld and Busch Gardens parks to see animals. Most people do not have the opportunity to observe these animals in the wild. Visitors are not only entertained, but also educated. The unique ability to observe and learn directly from live animals increases public awareness and appreciation of wildlife. 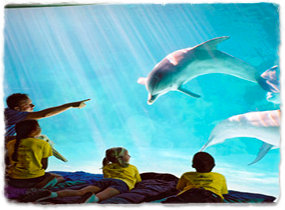 The unique ability to observe and learn directly from live animals increases public awareness and appreciation of wildlife.

Zoological parks teach the public about animals, their ecosystems, and conservation measures. A 2005 Harris Interactive® poll released by the Alliance of Marine Mammal Parks and Aquariums found 97% of respondents agreed that marine life parks, aquariums, and zoos "play an important role in educating the public about marine mammals they might not otherwise have the chance to see". Furthermore, 96% believe "marine life parks, zoos, and aquariums provide people with valuable information about the importance of oceans, waters, and the animals that live there". In addition, 93% agree that visiting a marine zoological park or aquarium "can inspire conservation action…and that people are more likely to be concerned about animals if they learn about them at marine life parks, aquariums, and zoos."

A 2009 study by Diane Sweeney was aimed to better understand learning in zoological settings, particularly learning about marine mammals through interaction programs. Her research concluded that all participants gained new knowledge within three broad categories: (a) dolphin physiology and natural history, (b) care and training of dolphins, and (c) conservation. Second, all participants constructed personal meanings by connecting the activity to experiences, beliefs, and practices outside the interaction context. Almost all participants made associations with conservation. Third, most participants shifted their attitudes and gained a sense of personal agency about beginning or increasing stewardship actions. Fourth, visitors learned interspecies etiquette skills; trainers learned skills in dolphin training and management, people management, and teaching. Fifth, visitors had long-lasting memories of the experience that occurred eight months to 18 years in the past.

Through formal education programs, millions of students have been given the opportunity to experience many kinds of animals up close. 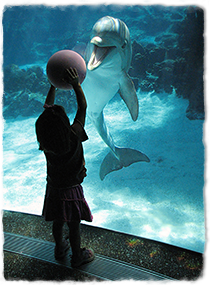 Husbandry And Care Of Animals 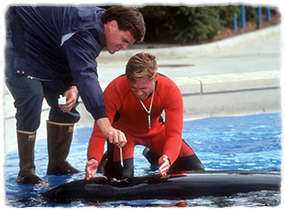 The animals are trained to present various parts of their bodies for examination, measurement, and blood sampling. They are trained to get on a scale, and even to urinate when signaled to do so. Most importantly, they are trained to hold still and remain calm throughout any examination. Trainers and veterinarians also are able to perform delicate procedures, such as taking x-rays and obtaining sonogram data. 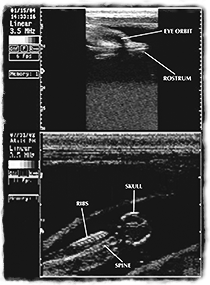 Through observing and caring for the animals, park experts are able to maintain detailed husbandry records. These records can be a valuable resource for the zoological community. More importantly, animal training techniques developed at SeaWorld and Busch Gardens have become a valuable tool. More than ever, zoological parks around the world are enjoying the benefits of using various animal training techniques in animal husbandry.

Routine husbandry procedures are the key to healthy animals and a healthy, genetically diverse population.

In cooperation with the American Zoo and Aquarium Association (AZA), SeaWorld and Busch Gardens have successfully bred many endangered species. AZA's Species Survival Plan® (SSP) program is dedicated to the survival of selected species like the endangered black rhino. 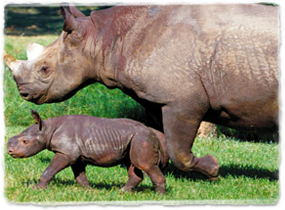 Managed breeding programs, enhanced by training husbandry procedures, have resulted in the births of endangered animals like the black rhino.

Animal training has benefited research for many years. By training animals to respond to various stimuli in their environment, researchers can gather scientific information that would not otherwise be available. The information gathered at the parks, combined with the results of field observations, has contributed to the body of knowledge about many types of animals.

With the help of SeaWorld’s animal training department, scientists from the Hubbs-SeaWorld Research Institute (HSWRI) have participated in a study on polar bear hearing to gain an insight into how polar bears sense their world. Researchers from HSWRI collaborated with San Diego Zoo Conservation Research on this study in which they tested the hearing of polar bears from SeaWorld San Diego and the San Diego Zoo. Four adult female bears and one adult male bear were tested during the study. The project was funded by Polar Bears International.

The study generated a u-shaped curve of each bear’s hearing frequency (roughly related to pitch) range. This is the first time a polar bear’s, or any other large carnivore’s, hearing has ever been tested. The study indicated that polar bears have almost two times the hearing range of an adult human, but less than that of a dog or cat, which have three to four times our range. They probably also hear low pitched sounds better than other carnivores, but these are difficult to study outside a specialized test chamber. 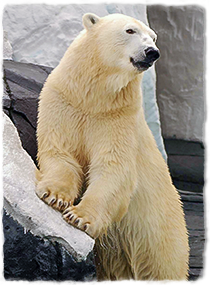 SeaWorld polar bears were involved in a hearing study by the Hubbs-SeaWorld Research Institute.

With the help of trainers, researchers were able to record calf vocalizations and track the development of the calf's vocalization repertoire. They compared the calf's repertoire to its mother's and those of the other whales in its environment.

The results of the study supported the hypothesis that a killer whale calf learns vocalization types from its mother. 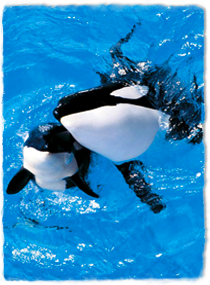 Researchers with the Hubbs-SeaWorld Research Institute were able to conduct studies on the vocal development of killer whale calves. The results of the study supported the hypotheses that killer whale calves learn vocalization types from their mothers.

Researchers wanted to determine the maximum swimming speed of dolphins.

Using target training and reinforcers, trainers conditioned the dolphins to swim at their fastest possible speeds while researchers recorded the data.

With the help of the keepers, Dr. Barklow became one of the first scientists to observe, analyze, and document the vocalizations of hippos both above and below water.

Through more than nine years of studies, Dr. Barklow is determining how these massive animals use their bodies and environment to communicate.

Barklow's research indicates a level of social organization in hippos that was previously unknown to us.

Busch Gardens' part in the ongoing study is to document the hearing abilities of hippos. Keepers sound various tones under water. They have trained the hippos to respond to the tone by pressing a lighted pad. 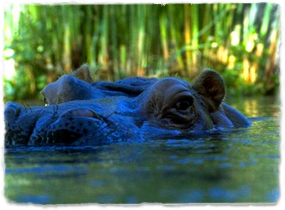 Busch Gardens has been contributing to an ongoing study of vocalizations in hippos.

Sometimes animal training combines husbandry and research. Trained husbandry techniques help keepers and veterinarians obtain baseline data; meaning they can learn what is considered "normal" in a healthy animal. These baseline data can be used to more easily diagnose and treat ill animals, as well as help scientists around the world learn more about similar animal species. Advances in artificial insemination, made possible through our training techniques, may even aid in the conservation of endangered animal populations.

In the wild, some animals are predators and some are prey for other animals. Hunting prey or escaping predators is essential for an animal's survival. Locating, pursuing, and capturing prey, as well as avoiding predators, pose physical and mental challenges for an animal.

At the SeaWorld and Busch Gardens parks, animals neither have to hunt for their food, nor do they have to avoid predators. The parks' complex, interactive animal habitats and training sessions provide the animals with physical and mental stimulation. The play, learning, exercise, relationship, and show sessions help keep their bodies and minds active. Environmental enrichments provide them with a variety of stimulating challenges. 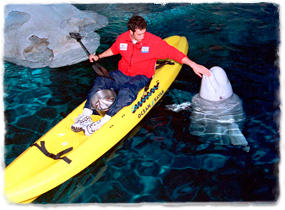